Expectations were high that WikiLeaks founder Julian Assange would be releasing “bombshell” information on Hillary Clinton’s campaign at a press conference early Tuesday morning, but it turned out to be more of a publicity event for the organization.

The lead-up to Assange’s speech was a celebration of the 10th anniversary of his organization with Julian’s “October surprise” as the piece-de-resistance – the grand finale wasn’t all that grand.

Zero information on Hillary Clinton or the U.S. election was revealed in this press conference, but Julian did announce publications of information on the election in coming weeks.

When asked if the upcoming publications would “destroy Hillary Clinton”, assange seemed to lower expectations by saying that he had been misquoted and that the publications would be “significant”, contain “interesting features” and have “several angles.”

The presser started with a video celebrating the tenth anniversary of the organization followed by a presenter-led slideshow of WikiLeaks accomplishments in which they claim to have released 10 million documents containing over 10 billion words in the 10 years since its founding. 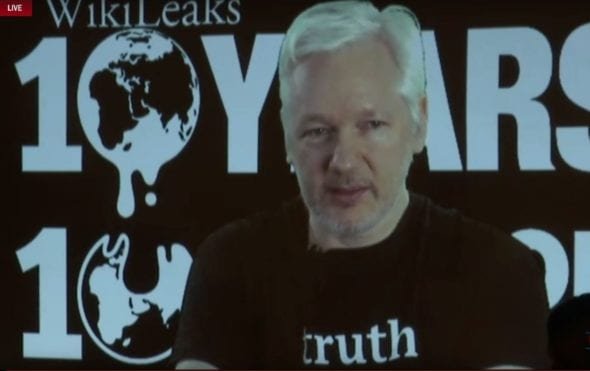 Julian Assange then appeared by video in front of a green screened image of the organization’s logo and 10th anniversary text.

No specific information on Hillary Clinton or the election was revealed in the press conference, only that documents on the “U.S. electoral process” and interaction between three states would be published “before the end of the year.”

Assange said that with the considerable amount of documents they have to publish by the end of the year, WikiLeaks will “have to be publishing every week for the next ten weeks.”

There was no indication of when the next release will happen and what information it may or may not contain.

Julian promised that the remainder of the publications this year would center on war, oil, arms, Google, and the U.S. Election.

Congrats to Julian for getting all of us to tune into his little birthday party at 3am to share absolutely nothing newsworthy.

If you’d like to see the video of the press conference, it is available HERE,

Support Conservative Daily News with a small donation via Paypal or credit card that will go towards supporting the news and commentary you've come to appreciate.
Tags
Julian Assange WikiLeaks