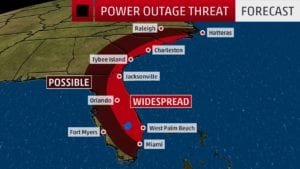 On Thursday. Florida Power and Light officials told reporters that most of Florida’s power grid could be decimated by Hurricane Matthew.

The last major storm to hit southern Florida was Wilma in 2005. 2.5 million customers were without power for at least 18 days – many .. for much longer.

“We could be talking about rebuilding the electric infrastructure,” Gould said early Thursday afternoon. “There could not be much left in terms of infrastructure.”

In a statement, FPL said that it is applying every possible resource to address power issues as quickly as possible.

“Our hardworking men and women at FPL, along with workers from contracting companies and our partner utilities from across the country, are ready to respond to Hurricane Matthew as soon as it’s safe to do so,” said Eric Silagy, president and CEO of FPL. “Our restoration workforce now totals more than 15,000 strong with approximately 12,000 of these workers in the field to restore our customers’ power. As long as it’s safe, our crews will be out in force restoring power as the first bands of severe weather hit, and we’ll work continuously after the storm clears until all customers have power again.”

The catastrophic hit on the Florida electric grid could be mirrored in parts of Georgia and South Carolina as Matthew moves north affecting millions more and impacting the region’s electrical grid.

Support Conservative Daily News with a small donation via Paypal or credit card that will go towards supporting the news and commentary you've come to appreciate.
Tags
Florida Power and Light Hurricane Matthew Hurricanes power outages