Instead of trying to turn Donald Trump into Mitt Romney, I suggest the campaign junta stop trying to construct a Debatetron 5000 and instead get Trump to utilize the assets that won him the nomination: Humor, the ability to connect with an audience and a willingness to say what programmed politicians won’t. 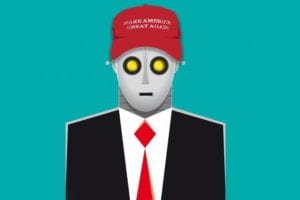 He’s not trying to convince the New York Times subscriber base to vote for him. Trump is trying to persuade independent voters who aren’t obsessed with politics to support him and, equally important, go to the polls.

And speaking of the Times, they’ve found another group of anonymous Trump staffers who’re going to single–handedly whip him into shape for the next debate. The term used is “rigorously prepare.”

Good luck, I can’t see them making a silk tongue out of a rabble–rouser’s ear.

The campaign can’t make Trump what he isn’t. He’s not going to sit still for some memorize–the–Koran debate workout. Instead of trying to make him into Meryl Streep, accept the fact he’s John Wayne and try to find a role that fits the venue.

Trump debate preparation should be fun, if the junta expects his willing participation. The bulk of it can consist of him watching his favorite person — Donald Trump — in one of his favorite activities: Speaking to adoring crowds at rallies.

Explain to him that when Hillary talks about crime or a crime–related question comes up he should respond with an illegal alien crime sound bite and then play the rally footage. Ask him to repeat what he just heard. The next day rearrange the order of the topics and clips.

Instead of treating the debate like Masterpiece Theatre, treat it like a sitcom. Trump can be engaging and funny. Bring those sides out. One of the most memorable occasions in the Bush Vs Gore debates was when Albert the 1st invaded Bush’s personal space and George W. looked at the camera and made a face.

It connected with the audience and expressed what all normal viewers were thinking. Trump should do the same. The debate audiences don’t help him because they are so stodgy. Trump feeds on the energy of the crowd. (Hillary feeds, too, but more like what happens in The Strain.)

Absent a loud crowd, let him look at the camera — since he’s on a split screen anyway — and try some non–verbal communication. It’s a technique Hillary is constitutionally incapable of adopting (also the only known instance of Hillary obeying any type of constitution).

The next debate is where the media will really be looking to trip Trump and make him look callous or insensitive as he relates to the “Millennial–in–the–Street.” This is the “Town Hall” session that consists of a crowd of angry leftists moderated by two condescending leftists.

The debate commission will assemble probably the only people in America who know less about the Constitution, the federal governments’ role and how government functions than Trump does and invite them to ask inane questions.

You never see a questioner ask how long it will take to deport all the illegal aliens. Instead they ask why the government hasn’t flown the rest of their family up from Bogotá.

It’s a hostile venue with a hostile audience and Trump will have to be better prepared.

Hillary probably couldn’t have passed the test at doping control after the race, but she crossed the finish line first.

Support Conservative Daily News with a small donation via Paypal or credit card that will go towards supporting the news and commentary you've come to appreciate.
Tags
2016 Presidential Debates Hillary Clinton Politics