Last week, during an aside in his speech at the Values Voters Summit, Rep. Louie Gohmert (R–TX) shared an insight into the timid appeasers comprising GOP congressional leadership. When he first entered the House in 2006 the talk was of the big things the Republican majority was going to accomplish. 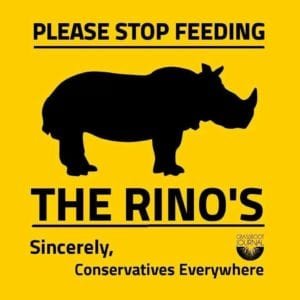 Then he attended a GOP House conference meeting and found leadership worried. They explained that yes, the plan was to do big things. But there was “a small chance” Republicans might lose the majority. So to play it safe, the leadership wants to do small things, win the election and keep the majority.

Then, they’ll do great things.

Gohmert was just a freshman member at the time but he spoke up, “If there’s any chance we might lose, then this is the time to do the big stuff.” But Gohmert was ignored.

Conservative voters are still waiting for those “great things.”

Elect a Democrat and they wield power. Elect a Republican and they hold office.

GOP leaders hoard their majority like dwarves hiding under the Lonely Mountain, until the Dragon Pelosi shows up and snatches it away. This explains why a constitutional ignoramus like Nancy Pelosi in her four years as speaker did more to advance the leftist agenda than the last three Republican speakers combined did for the GOP.

This week conservatives have another example of GOP cowardice. The headline in The Hill read: “GOP averts vote on impeaching IRS commissioner.” “Averting” is a GOP leadership specialty.

Here a just a few times these surrender monkeys have ignored their conservative base:

Each one of these surrenders only serves to make Congress more irrelevant and the president and his appointees stronger and more defiant. That’s why this impeachment vote was so important. The Obama administration turned the IRS into its political enforcement arm without any consequences.

Commissioner John Koskinen brought in by Obama to “clean up” the IRS, mislead Congress about disappearing email. Didn’t protect other IRS data that Congress specifically ordered him to preserve. Failed to protect subpoenaed documents and another 24,000 Lerner email messages. As Rep. Jason Chaffetz (R–UT) told the New York Times, “He provided, I think, a whole series of false testimony. You can’t be under a duly issued subpoena and mislead Congress, and when you provide false testimony there has to be a consequence.”

Koskinen and the IRS are tailor made for a visit to the woodshed. Although powerful, the IRS has no natural constituency outside government. Impeach the EPA director and every druid in the nation will be chaining themselves to the Cherry Trees. Go after Agriculture and it’s tractors and nutritionists laying siege to Washington.

But the only constituency for the IRS is lobbyists who milk it for tax loopholes.

What’s more, the IRS is beatable. Just ask the Church of Scientology. It fought a war with the IRS to force it to grant Scientology a church tax exemption. GOP leaders whine about the media and bad PR, yet there is no Fox News for cults to give the Scientology side of the fight. And the church lacked the base of the Republican Party.

Yet Scientology won, while the GOP surrenders. Scientology fought the IRS for 25 years. GOP leadership won’t fight for 25 news cycles.

The impeachment of IRS Commissioner John Koskinen was designed to send a message to a rogue executive branch that in the future Congress is going to assert its constitutional power. Unfortunately Paul Ryan was the messenger.

Now instead of a vote on impeachment, the House will hold yet another hearing where Koskinen will be able to peddle the same lies and half–truths he did before, content in the knowledge these putzes are powerless.

Then after the election — maybe on Christmas Eve! — a quiet vote on impeachment will be held and the issue will go away.

This is why Trump is the nominee instead of the establishment candidates. Conservatives are tired of a “leadership” that defines victory as holding a successful hearing and winning a news cycle.

We define victory by winning.

Support Conservative Daily News with a small donation via Paypal or credit card that will go towards supporting the news and commentary you've come to appreciate.
Tags
Congress John Koskinen Louie Gohmert Politics RINO the IRS