There is widespread perception by many conservatives that the Republican Party has morphed into a version of Democrat-light, abandoning its values and migrating to the left of the political spectrum. There are many explanations for this perception, but historical insight and hard facts principally refute the assertion. 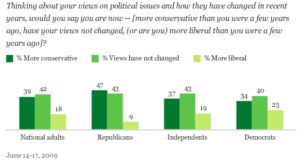 Senior political writer Clare Malone of FiveThirtyEight.com made the astute observation recently that; “The party has been growing more conservative and less tolerant of deviations from doctrine over the past decades…” Polling by Gallup confirms that this is the case. In a 2009 survey of political ideology, Gallup revealed, “Americans, by a 2-to-1 margin, say their political views in recent years have become more conservative rather than more liberal, 39% to 18%, with 42% saying they have not changed. While independents and Democrats most often say their views haven’t changed, more members of all three major partisan groups indicate that their views have shifted to the right rather than to the left.”

Gallup further delineated the ideological trending of the population. “Indeed, in the latest survey, 38% of Americans describe their political views as conservative, and among this group 58% say their views have grown more conservative in recent years. Although a large segment of liberals (42%) say they have become more liberal, far fewer Americans in the poll (18%) describe themselves as liberal — thus providing little counterweight to the rightward movement of conservatives. At the same time, political moderates are twice as likely to say they have grown more conservative as opposed to more liberal (33% vs. 18%), thus further tipping the scales in favor of conservatism.” 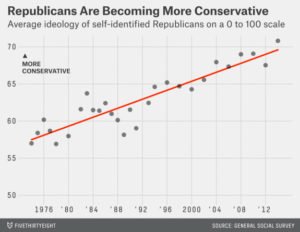 Since individual perspectives from members of the party vary significantly, the most accurate way of assessing party convictions and value system is by analyzing the platform evolution over the years. Those platforms are affirmed by the majority of party members at the quadrennial national conventions, and consequently will reveal major or minor shifts in policy.

Reviewing party platforms since 1900 (there are 28 of them) is enlightening not only from an ideological alignment and policy perspective, but also for the historical perspectives. Much of the verbosity in party platforms is comprised of historical context specifics, referencing current affairs, the current state of the economy and foreign affairs, and affirming the policies needed to either be perpetuated, or incorporated in response to those conditions. Much is also immensely entertaining reading, as in the 1900 platform where Democrats fiscal policies are maligned as a “menace” to the nation, and lamenting the “general incapacity of the Democrat party to conduct public affairs.” 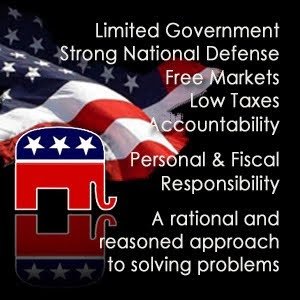 Aside from the histrionics and contextually sensitive planks, the dominant impression is of the sameness of all of the platforms with regard to foundational commitments. With remarkable consistency, the platforms stress a strong economy, economic growth, a financially sound dollar, limited or reduced spending, curtailment or reduction in the growth of government, preservation of individual liberty, a strong military, sound foreign policy, governance based on the Constitution, affirmation of our founding principles, and common sense solutions. Some are more ardently stated in certain years, as in 1992 with Newt Gingrich’s “Contract With America,” and the 1928 anti-regulation focus of Herbert Hoover, but all of the themes are evident.

Indeed, nearly all of the differences from one four-year-cycle to the next are based either in historical context, or more vociferous affirmation of a few planks over the others. Again, since these platforms are established by party faithful, and affirmed by members at the quadrennial conventions, they can be viewed as affirmation of core party principles. And it would appear that those core principles have not changed. 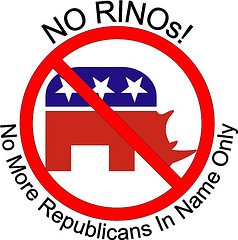 So why do so many conservatives believe the party has shifted to the left? Part of that could be in the fact that some of the most visible Republicans are perceived to be “RINO’s,” or Republicans in name only, and some of those have been our presidential candidates, including this year’s nominee, as there is little evidence of his conviction to some of the party’s core principles. Many also believe that congress is made up mostly of “RINO’s” since they’ve failed to stop Obama’s “fundamental transformation” of America.

But this is nothing new. There have always been “RINOs” in the party, and likely always will be. Although the acronym didn’t gain prominence in conservative circles until the 1990’s, the phrase “Republican in name only” has been around since the 1920’s. In fact, in the 1930’s and 40’s, there was a phalanx of party members known as the “Me Too Republicans,” who basically aligned with the policies (and popularity) of FDR. And going back even further, in 1912, former President Theodore Roosevelt and then-President William Howard Taft, fought over the GOP by referring to each other as “not really Republican.” 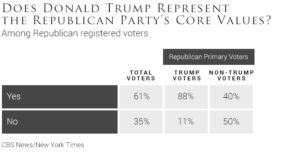 Selection of this year’s GOP presidential nominee certainly shouldn’t be construed as evidentiary to a party shift to the left. Evidence suggests that this year’s GOP nominee was not selected predominantly by Republicans, but primarily by record numbers of Democrats who switched tickets in open-primary states to secure the most vulnerable candidate against Hillary Clinton. Estimates range from five to twelve million Democrats crossed over in open primaries to select the most vulnerable of the GOP candidates. If those data are correct, as few as four million Republicans actually played a hand in selecting this year’s nominee. Given that verity, it’s illogical to claim the GOP has “abandoned its values” in selecting this nominee.

Politico confirmed this in May by stating, “While Trump’s insurgent candidacy has spurred record-setting Republican primary turnout in state after state, the early statistics show that the vast majority of those voters aren’t actually new to voting or to the Republican Party, but rather they are reliable past voters in general elections. They are only casting ballots in a Republican primary for the first time.”

With Republican Party core principles, as enunciated in their platform over the past 100 years, and the evidence that there have been Republicans in name only for the same duration, it would appear that the party has not shifted to the left at all. But there is ample evidence that self-identifying conservatives are becoming increasingly conservative, which may in fact be creating the mistaken perception, rather than the Party moving to the left.