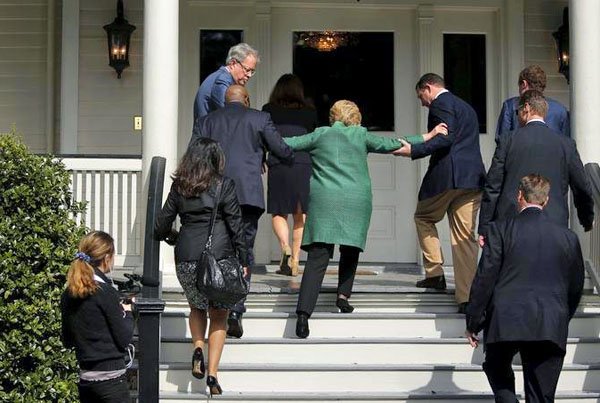 As the liberal media is all over Trump day in and day out 24/7 making stories up about him and scaring the population about him, they should be concerned about their own cause Hillary. She is not in the best of health and neither is Bill.

She has been the subject of falls and tripping up stairs to airplanes, she “has fainting spells and memory lapses” (Huma’s words not mine), exhibits  foul language and abusive behavior to s .s. agents and staff, has coughing fits when giving speeches and has displayed seizures in public.

More recently she was observed having difficulty going up a stairs and needed several secret service people to lean on. This is not good for someone running for office. And they say Trump is not qualified?  Trump is very energetic, always on the go and only gets four hours of sleep a night. He’s had a very successful career world- wide, knows how to negotiate with world leaders, is concerned about the country and loves our police and military.  I would rather have someone like that in charge of the country than a 70 year old woman who needs help going upstairs and has seizures in public. ‘Unstable’ Hillary gets help climbing stairs (see some of her seizures here).

Hillary on the other hand has to take naps in the afternoon and slept through the 3 a.m. Benghazi call which she should have been awake for. At a recent rally she was speaking when all of a sudden she froze and had a deer in the headlight look on her face. An aid who at first was thought to have been a  secret service agent but later identified as a medical assistant from the pin on his lapel rushed to her side and said  “keep talking” to her as he injected her with a diazapam pen. Diazepam is used to treat anxiety disorders, alcohol withdrawal symptoms, or muscle spasms. See pics here and video in the comment section. https://www.libertywritersnews.com/2016/08/urgent-hillarys-medical-handler-exposed-look-sick-thing-injects/

In one of her more pronounced seizures her head bobs back and forth when confronted by several people at once. Psychiatrists have said people prone to seizures being confronted by several people at once  can trigger seizures like that. Note the surprised look on the reporter’s face at first before she returns to smiling.  https://www.youtube.com/watch?v=Hd4NH9jKNas&feature=share

But while everyone is discussing Trump’s sanity, what about Hillary’s?

Talk-radio titan Michael Savage finds it fascinating that the media would focus on Trump’s supposed craziness while failing to explore Hillary’s mental state.

“Very interesting, considering Obama is clearly a sociopathic liar,” Savage, author of “Liberalism is a Mental Disorder,” told WND. “Hillary is also  a sociopathic liar. Of course they would try to smear a man who built his own empire rather than stealing it from the taxpayers and foreign governments. Of course his mental state intrigues them given their own mental deficiencies and pathologies. To the coelenterates in the media, transsexual songs ring truer, Islamists do not exist and there is no terror, only a lack of jobs. So who is the sickest?”

Hillary Clinton has indeed become well known as a serial liar, as fully two-thirds of Americans, 68 percent in a recent poll, said she was neither honest nor trustworthy. Not only does Clinton lie to protect herself, as she has regarding Benghazi and her private email server, but she lies when there appears to be no benefit to doing so.

For example, she famously claimed she was named after Sir Edmund Hillary for his conquering of Mt. Everest, even though that didn’t happen until six years after Clinton was born. She also notoriously claim she landed under sniper fire in Bosnia in 1996, when newspaper and video accounts revealed exactly the opposite.

Some of Clinton’s mental and behavioral problems may in fact have a physical basis. In late 2012, she suffered a concussion and a blood clot inside her skull. When she was late getting back to the stage during a Democratic primary debate last December, people thought she was taking a long bathroom break, but a law enforcement source with inside connections wrote on Twitter that she was experiencing a flare-up of problems from her brain injury.

Mental illness is nothing to ignore,” Loudon said. “It is dangerous to all involved. Hillary’s behavior might indicate a much deeper, darker mental condition that is flatly ominous. She has had visual, memory, and reasoning issues in recent years, after her head injury. She has endured many subsequent falls, which would be obvious indicators of traumatic head injury.

“Instead of running for president, Hillary could be seeking a medical battery of testing that could get to the heart of what may be a worsening mental disorder, as well as intense therapy and perhaps medication (if she isn’t already medicated), before more lives are lost at the hands of her incompetence.”

She added: “If the condition of someone with such systemic mental conditions worsens, their decision making capacity and overall ability to distinguish truth from fantasy could be impaired. This would be dangerous for the leader of a family, or a company, but it could be devastating for a national leader.” So, Trump’s crazy? What about Hillary?

Political pundit, republican  strategist and writer Roger Stone recently was interviewed by Alex Jones on his Info Wars show and described Hillary as having a duel personality saying, “at one time she seems like this nice grandmotherly type then changes into being short tempered, foul mouthed, abusive volcanic, angry and a greedy psychopath.“ Stone said he thinks Hillary had a small stroke recently.

Alex replied that “the type of behavior she exhibits is what you see in mental institutions.”

On his TV show, known psychologist Dr. Drew who has treated many patients with drug and psychological disorders has said if Hillary is elected the pressure of the job could kill her in office. So if anything should happen to her I don’t want to hear the media say, “How could we not have seen this coming?” Because the signs are all there you just chose not to see them and to concentrate so pathologically   on Trump rather than the real serious patient,Hillary.