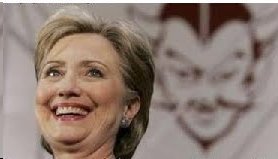 Hillary Clinton and Obama are both followers of Saul Alinsky who wrote Rules for Radicals and dedicated it to Satan. Obama and Hillary use these rules in their governing.

Hilary has got to be one of the most foul mouthed evil people I’ve ever seen. How anyone could possibly  vote for this evil, evil, evil, lying corrupt woman is beyond me,  Wake up America  she’s not going to  get any better She doesn’t care for anyone except herself.!!! Between her and Bill it is all power and greed.

In his book “Crisis in Character” former Secret Service agent Gary Byrne who was assigned to the Clintons says when Hilllary walked around the White House, NO ONE was permitted to look her in the eye, they all had to lower their heads with their eyes towards the ground whenever she walked by.  She was so abusive that she berated agents constantly and drove them to drugs and alcoholism. Byrne says her constant berating of Vince Foster drove him to suicide. Byrne also recounts how she threw an expensive vase at Bill after he got caught with Lewinsky situation and gave him a black eye with it.

I can believe these charges just by listening to her speak. She doesn’t talk but shrieks and yells so irritating  that it sounds like running fingernails down a blackboard. It shrills right through you which is why some people refer to her as “Shrillary.”

I have always considered myself to be a good judge of character just by looking at a person from my 40 years of dealing with the public on a daily basis so when I look into the face of Hillary Clinton I see a very angry, vindictive, abusive, selfish  woman who covers it up with phony smiles. I hear the same thing in her voice too.

She has an extremely foul mouth that would fit in well with any construction worker or truck driver. I am not repeating the words here but you can see them yourselves right here. These are actual quotes in books by people who heard them. As you can see she is quite fond of the ‘F’ word. Many of these quoted in the link are verified by the books they appeared in all by very competent authors who knew the Clintons personally. Hillary Clinton Quotations

Let’s not forget her famous quote about our ambassador and three others who died in Benghazi because of her and Obama’s errors. “What difference at this point does it make?”

I’ve heard many of these young female millennials say Hillary would be great for women’s issues. I wonder if they realize Hillary pays hew male staffers at the Clinton Foundation $30,000 more than her female staffers. Trump pays his female colleagues more than his male colleagues. If Hillary is so great for women’s issues then why does she take millions of dollars from countries who abuse women unmercifully and discards them like trash as well as hanging gays and throwing them off roof tops.

For those who still think Hillary shouldn’t go  to jail and to reinforce those who think she should be in jail, here is the federal statute she is violating:

(a) Whoever willfully and unlawfully conceals, removes, mutilates, obliterates, or destroys, or attempts to do so, or, with intent to do so takes and carries away any record, proceeding, map, book, paper, document, or other thing, filed or deposited with any clerk or officer of any court of the United States, or in any public office, or with any judicial or public officer of the United States, shall be fined under this title or imprisoned not more than three years, or both.

(b) Whoever, having the custody of any such record, proceeding, map, book, document, paper, or other thing, willfully and unlawfully conceals, removes, mutilates, obliterates, falsifies, or destroys the same, shall be fined under this title or imprisoned not more than three years, or both; and shall forfeit his office and be disqualified from holding any office under the United States. As used in this subsection, the term “office” does not include the office held by any person as a retired officer of the Armed Forces of the United States.

Hillary is also for open borders and like Obama is a globalist who believes we are just another country and not the great leader of the world. She believes the U.N., should be in charge of the world and plans to bring in 100.000 Syrians. She will continue to destroy our country that Obama started if he doesn’t finish it first. She is evil to the core.