Call it the Forty–Year Itch, there’s something about being in a larger combination of former opposites that causes husbands and nations to get restive. Forty–four years after the Constitution was ratified in the United States the nation experienced the Nullification Crisis. That’s when South Carolina declared tariffs passed by Congress in 1828 and 1832 were null and void and would not be enforced. 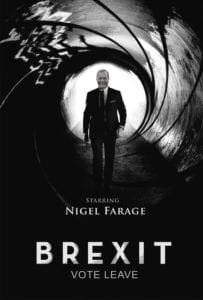 Now 43 years after joining the European Union, the United Kingdom is having second thoughts about being a member of a ramshackle confederation run by pointy–headed cappuccino–drinkers in Brussels. This means there are two consequential elections this year that pit the forces of tradition and history against the promise of a trendy utopia just around the corner, if you’ll shut up and follow orders today.

We won’t find out if nationalist Donald Trump will defeat national nanny Hillary Clinton until November, but the citizens of the UK will find out June 23rd.

The panel’s consensus was a Brexit exit would be good for the UK. Gardiner characterizes the vote as one between the elite and the man–in–the–street. The UK “is no longer a free country.” The nation’s courts are “subservient to EU courts” and Hilton points out that over half of current government activity goes toward enforcing EU rules and regulations with which the UK government actively disagrees.

This Brussels’ usurpation by executive order effectively disenfranchises the majority of UK voters that elected Cameron and his Tory government.

Ironically, the “Remain Campaign” is led by Cameron, who evidently doesn’t mind being neutered as long as he gets to keep the Downing Street address and the perks. The Brexit vote and the fault line it exposes between leaders and led is much like the illegal alien controversy we have here.

Financial interests, cosmopolitans and cheap labor exploiters like illegal immigration because it puts money in their pocket and the people hurt are invisible in their social circles. The UK equivalents support remaining in the EU for many of the same reasons. Unfortunately for party leadership in conservative circles both here and in the UK, the base here wants illegal immigration stopped and the base in the UK wants out of the EU.

Cameron promised a referendum as a bit of throwaway red meat during the election campaign. He assumed he would be forming a coalition in Parliament and the partner would block the vote. He vastly underestimated the power of the issues and was astonished when the Tories won outright and didn’t need a partner.

Now Cameron’s forced to have the vote and the process hasn’t done anything to rekindle an affinity with his base and it’s made him something of a pariah on the continent. His own party is split with an insurgent camp urging “Leave” while he clings to “Remain.”

The situation didn’t improve for him when the largest newspaper in Britain, The Sun, urged a “Leave” vote because “at the ballot box, we can correct this huge and historic mistake.  It is our last chance. Because, be in no doubt, our future looks far bleaker if we stay in.”

Hilton says much of the campaign by “Remain” forces pits the sovereignty argument for leaving against an economy argument for remaining. But he contends that’s a false dichotomy. “The vote about sovereignty is a vote about economics”. Gardiner predicts a rosy future for the UK outside the EU. “The economy will be more vibrant, stronger and more prosperous.”

As support for “Remain” has declined the campaign has become more frenzied. The warnings of Project Fear, as it’s commonly termed, are now described by Gardiner as a “combination of the Walking Dead and Godzilla.

One indication of Cameron’s alienation and desperation was his decision to bring that master of diplomacy Barack Obama to London to lecture the public on why they should vote to “Remain.”

In Gardiner’s words the visit was “an astonishing slap in the face and an absolute disgrace.” Obama’s special magic resulted in a decline in Remain support that has continued until today. The latest polling shows “Leave” to be ahead by up to 10 points, reversing what had been a substantial “Remain” advantage.

Hilton sums up the EU as “an organization with three presidents, none of whom are elected.” Which may explain Obama’s eagerness to get involved. Maybe he’s hoping for a third, fourth and fifth term overseas once he wears out his welcome here.

Support Conservative Daily News with a small donation via Paypal or credit card that will go towards supporting the news and commentary you've come to appreciate.
Tags
Brexit Immigration Politics The ACU