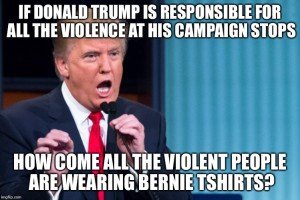 I wonder what Ted Cruz hoped to gain from blaming Donald Trump for the leftist mob that forcibly shut down his rally in Chicago?

You would expect this confused moral inversion from squishes like Marco Amnesty and John “The Apostle” Kasich, but not Cruz.

Formerly he was a staunch defender of the 1st Amendment, going all Voltaire on anyone trying to censor speech. Turning on a dime to gain a news cycle on Trump doesn’t do anything to dispel Cruz’ unfortunate image as an opportunistic professional politician.

Why does Cruz choose to do the work of the mainstream media and the left who want to subvert everything for which he claims to stand?

There are events in contemporary America that go hand–in–hand with violence. Take Hip–Hop “music.” Here in the DC area many venues won’t host Hip–Hop concerts because of recurrent violence associated with the fan base. Trump’s fan base has impressed even the New York Times with its good manners: “The Trump supporters I interview are almost unfailingly courteous. In the snaking lines of traffic that precede his events, they smile and wave and allow me to cut in front of them. And they politely answer my questions…”

So how is it Trump’s fault when the Hip–Hop base invades his rally and causes violence?

And why is Trump’s base always described as “angry” and Bernie’s as “idealistic?” If Trump people are so “angry” and violent why aren’t they breaking up Bernie’s events? Where are the shouters and stage rushers at Hillary’s wakes?

This unprovoked anger and violence is a product of the leftist mob, not Republicans.

The same people that smashed car windows with Trump stickers in Chicago. The same creeps who vandalize a Trump supporter’s home in Gainesville, VA by spray painting her house. The same pajama fascists caught spray painting penises in a university chapel along with the word “Trump.”

This is the group Ted Cruz is temporarily abetting?

Let’s reverse the situation. Picture a group of pro–life demonstrators who get to reeling with the feeling and invade a Planned Parenthood abortion mill. They block the inner door in the waiting room and force Bible tracts on waiting customers. There is pushing and shoving and an employee is accidentally hit in the head with an illustrated, hardback copy of the New King James Bible, a surefire concussion inducer.

Cruz is a smart fellow, I wonder if he really thinks leftist violence is only associated with Trump? He hasn’t had protest problems because his crowds have been too small. Leftist narcissists follow the media and the media follows Trump. That situation changes this fall if Cruz is the nominee.

Then Cruz gets the crowds and he gets the leftist mob that will say he’s now the bigot, the racist, the xenophobe and the chief warrior against women. Ted will find himself in a real Martin Niemöller situation.

The statement Cruz should have made after the planned attack on the Trump rally is easy enough to write: “Anyone that has watched even one of the Republican Presidential debates knows that I have disagreed with Donald Trump on both his choice of language and his policies. But I stand shoulder–to–shoulder with Mr. Trump in defense of the 1st Amendment, which protects free speech and most particularly speech with which we disagree. These leftist protesters have every right to stand outside and lawfully voice their disagreement with Donald, or myself for that matter. But when they invade a Trump rally with no other goal than to gain attention and prevent the audience from hearing what Donald has to say, I draw the line and they should suffer the consequences for breaking the law.”

There, that wasn’t so hard was it?