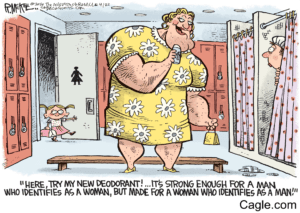 North Carolina has a reputation for going the furthest in the pursuit of a lost cause. The Gettysburg battlefield features a monument carefully placed at the “high watermark of the Confederacy” where the 26th North Carolina came to within ten paces of the Union position in The Angle before being driven back.

That Civil War conflict took place on 11,500 acres of Pennsylvania farmland. North Carolina’s latest battle is being fought stall–to–stall in public bathrooms around the state.

Hostilities commenced when the governor signed a bill requiring people using public restrooms to patronize the facility that corresponds to the plumbing noted on their birth certificate. From the reaction of the Gaystapo one would have thought the new law required a public declaration followed by a TSA–style body cavity inspection.

Realistically passage of the law would not affect the bathroom destination of most of the population. Cross–dressers and transvestites are no doubt already sneaking into women’s bathrooms. What the law meant is the state would not give its official blessing to switch–sitting and if a switch–sitter was caught in the act, so to speak, there would be consequences.

The law allowed business and individuals to set their own bathroom regulations, up to and including playing fruit basket turnover.

For a few days it was the usual Christians versus the licentious affair until PayPal entered the fray. The Internet payment company made a big production out of cancelling a 400–employee planned facility in Charlotte.

CEO Dan Schulman began his moral preening by declaring, “Becoming an employer in North Korea, (whoops, typo, should be Carolina) where members of our teams will not have equal rights under the law, is simply untenable. The new law perpetuates discrimination and it violates the values and principles that are at the core of PayPal’s mission and culture.” He added his decision, “reflects PayPal’s deepest values and our strong belief that every person has the right to be treated equally, and with dignity and respect.”

This is the same domestic cheap PC–PR point–scoring that had Apple fighting the FBI over a phone used by a terrorist.

Normally I would insert an analogy here to point out Schulman’s cheap moralizing, but it’s so difficult to find any real convictions in an executive like this — other than a commitment to making money and a vague, extremely flexible secularism — that constructing relevant analogies is extremely difficult.

For example, PayPal has no trouble doing business in Saudi Arabia where the penalty for homosexual behavior, to say nothing of switch–sitting, is significantly more stringent than in that hotbed of hate North Carolina.

But I’m going to try. Let’s say Schulman gets a call from the front desk that informs him there’s a nice man named Nevada Starshine who has decided his persona is a mistake and he really identifies as Dan Schulman. And oh, yes, he wants to use the toilet in the real Schulman’s office.

That puts the bathroom on the other foot. Based on Schulman’s statement he can’t say it’s a case of mistaken identity, because that fails to treat Starshine’s delusion with “dignity and respect.” Sure the lobby Schulman is mentally ill, but so is someone who says the DNA factory made a mistake and they are a man trapped in a woman’s body.

Schulman is one of those cultural Marxists who have no problem imposing burdens on law–abiding citizens at the expense of their rights (see: Common Sense gun laws). It’s fine to demand North Carolina allow men to use the ladies, but hot–swapping his own seat is a toilet too far.

And where does Schulman draw the line?

National Review found a Norwegian woman who claims she’s a cat trapped in a woman’s body. Will the state be forced to supply litter boxes for tabbies like her? Or should the Arizona woman interviewed by the Telegraph who says she’s really a dragon be allowed to demand a horde of gold to sit upon?

That sounds like cutting off your nose to spite your face, which is a surgery where even the “trans” community draws the line.

Support Conservative Daily News with a small donation via Paypal or credit card that will go towards supporting the news and commentary you've come to appreciate.
Tags
Dan Schulman North Carolina PayPal Politics

In Defiance of His Critics, Pope Francis Expected to Be In Canada July 24-30

Desiderio desideravi: There Goes The Neighborhood or Here Come Everybody?