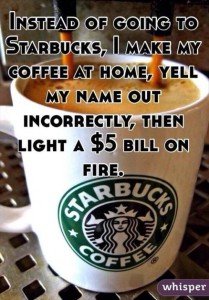 San Francisco leftists have once again decided to inflict another socialist utopia on an unsuspecting South American nation. What’s more, just like at Jonestown, a popular liquid is playing a prominent role.

This time instead of a male heretic imposing a fanatical religion, we have two women, Helen Russell and Brooke McDonnell, doing orthodox socialist missionary work.

The ladies are owners of Equator Coffee, a trendy gourmet emporium with two San Francisco area locations. The utopia is Finca Sophia a coffee farm owned by the company and located in Panama. The duo has decided to upend traditional coffee–growing practices in favor of importing California thinking, but since the ladies are card–carrying progressives this is not cultural imperialism.

In 2008 Equator flew in another female to manage the operation and got to work. In their view the land had been abused by being “clear cut.” (Local farmers, before the new owners parachuted in, called these treeless areas “fields.”) The new philosophy was planting with “sustainability in mind,” although that doesn’t appear to extend to economics.

The land was replanted with shade trees and a monoculture of Gesha coffee, a variety of bean that can be viewed “legendary” or forgotten, depending on your viewpoint.

Equator’s second break with tradition was coffee itself. Most coffee beans are grown at an altitude of approximately 4,000 feet. The altitude at Finca Sophia is 6,300 feet, which means the plants are as oxygen–starved as a socialist’s brain.

Since coffee and thought processes grow very slowly at that altitude, the new owners decided to occupy their time by upgrading the life of their “indigenous” employees. Equator provided free health care and education for employee families.

Then time passed. Think of it as coffee grown by the postal service. Racing against the 22nd Amendment, Equator was finally able to bring in it’s first crop before Obama left office. The hand–picked beans, soaked in ideology, were packaged and rushed to California where coffee connoisseurs have an opportunity to savor the social justice at a mere $15 for an 8 oz. cup.

Or if you prefer to risk making your own coffee at home without the supervision of Equator’s “coffee educator,” half a pound will set you back $75.00.

To put this in perspective, the US Navy’s alternative jet fuel — made from snips and snails and puppy dog tails — only costs $150 a gallon, while Equator’s java is $240! At that price you’d think ownership would throw in a free Bernie Sanders bumper sticker, unless Bernie’s voters are the ones pouring the coffee and glaring at people slurping down a whole hour’s pay.

At that price I could have a cup of coffee or lunch, but not both.

Fortunately for Equator, I’m not part of their customer base. According to the SFist, the people who are customers eagerly soak up the Market Street location’s daily allotment. But Equator owners are discovering the best of misguided intentions can’t avoid eventually colliding with reality.

Even at $15 a cup the store is losing money on every pour. And this is while the brew is new and noteworthy.

After the novelty wears off, Equator may discover most customers would prefer to drop a quarter in the UNICEF jar to express social justice solidarity and hold the coffee price to under five bucks a cup — rather than have their wallets recruited by management to support its caffeine Shangri-La.

Equator owners do deserve credit on two fronts: First, for using their own money to subsidize this fantasy and not my tax dollars.

And second, for providing the answer to the question of what’s going to happen if government continues arbitrarily raising wages and increasing benefits without any economic justification. Even $240–a–gallon coffee won’t generate enough revenue to cover the cost.

Support Conservative Daily News with a small donation via Paypal or credit card that will go towards supporting the news and commentary you've come to appreciate.
Tags
Coffee jobs Minimum Wage the economy