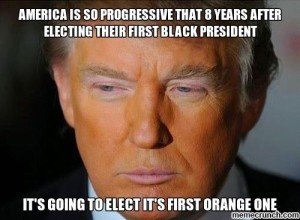 The Virginia Republican Party has discovered it’s one thing to issue a political “Do Not Resuscitate” order and quite another to get it to stick. Back in September the State Central Committee decided to require all voters in the March 1st GOP primary to sign a pledge that states: “My signature below indicates that I am a Republican.”

The idea behind this plea to be left alone was Virginia Republicans didn’t want a bunch of Trump voters cluttering up the polling places and spreading dangerous ideas about standing up to condescending elites.

Why you’d have thought they were asking for bi–lingual ballots!

Whoops, my mistake. The bi–lingual ballot folks are just the voters the GOP establishment hopes to welcome any decade now. As one insider told the Washington Post, “the party is highlighting the [loyalty pledge] to box in Trump, whose swipes against illegal immigrants have been an “unmitigated disaster” for a party trying to expand its outreach to minority voters.”

You can imagine that insider’s dismay when Hillary was the first candidate to be photographed in a Chipotle. I expect to see Chris Christie and John Kasich there soon, if their campaigns can hold out until the quarantine ends. Why should party panjandrums work to welcome independents and swing Democrats when you can make the Chamber of Commerce happy by legalizing generations of big government Democrat voters?

Why don’t they ask for asylum and allow Univision to be a debate sponsor? Whoops, yet another mistake! Univision WAS a debate sponsor until a potential revolt of GOP candidates — even the Canadian — forced the Republican establishment to listen to citizens for a change.

I’ve never understood the hubbub Trump causes among GOP apparatchiks. If the Democrats can allow a man who’s not even a member of their party to run for president, why can’t the me–toos that run the GOP allow independent and swing voters to participate?

I say let Trump’s anchor–Republicans vote. Who knows, it could prove habit forming.

The other feeble justification for oaths is to prevent crossover voting. This is when members of the other party vote in the opposite primary to attempt to elect a candidate that will be harmful in the fall. Instances of successful crossover voting operations are as hard to find as instances of Islamophobia.

In any event crossover attempts can be stopped dead by notifying voters their participation in the primary means they’ll be receiving Republican junk mail for the next decade. My wife and daughter are still getting mail from abortionists, alternate lifestyles advocates and amnesty supporters dating from their participation in Rush Limbaugh’s ill–advised stop Obama crossover operation in 2008.

Isolationist GOP officials held out as long as possible and then gave up last month. Like Marxist true believers, instead of admitting it was a bad idea from the beginning, party officials are now claiming the oath wasn’t a problem it was the state election board’s implementation that forced the party to recant.

Now voters participating in the GOP primary will be able to vote without signing a loyalty oath or passing a literacy test.

My suggestion for the future would be instead of harassing voters, the party should require a loyalty oath from candidates. Make them sign an pledge that if a candidate runs as a conservative, he promises not to govern as a RINO (Republican In Name Only). One law Virginia has that more states should adopt is the “sore loser” law. This states that any candidate who loses a primary election can’t run as an independent in the general election.

That would stop both Trump and Hillary.

Personally, I’m going to miss signing the pledge. I was hopeful there’d be plenty of room on the signature line so I could add: “My coerced signature indicates this party is run by morons.”