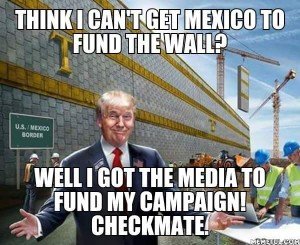 In 1998 I worked in a long–forgotten Venezuelan presidential race that has an important lesson for Donald Trump. The contest featured a celebrity outsider with perfect hair running against corrupt political insiders. (Is that redundant?) In Venezuela the insiders weren’t long–serving officials or hangers–on who became ethically bankrupt. The members of COPEI were criminally corrupt and many officials were jailed.

Irene Sáez, a former Miss Venezuela and Miss World, was the celebrity outsider. Sáez formed her own party called Integrated Representation of New Hope, which sounds clunky in English, but very Trumpy in Spanish since the initials formed the acronym IRENE.

Her unofficial campaign song was “Barbie Girl,” which pretty much topped off the package.

The combination of celebrity, outsider and iconoclasm catapulted Irene into what appeared to be an insurmountable lead. In the last poll of 1997, a year before the election, her support was 70 percent with none of Trump’s “built in” negatives.

Irene’s peroxide blonde hair received as much vilification as Trump’s does now. (History note, Trump’s coiffure is not original: During the Civil War generals with like hairdos were said to “have their rear guard doing the work of skirmishers.”)

Even though Sáez was mayor of a toney suburb of Caracas, pontificators viewed her as a lightweight who would soon discover running Venezuela is much different from sashaying down the runway at the Miss World pageant.

Her supporters were denigrated much the same way Trump’s are: Undereducated, unwashed masses lured by the siren song of celebrity. The only thing they weren’t accused of being was white, since after all it was Venezuela.

The expert’s mistake was overlooking the three steps to voter persuasion.

Celebrity only gives candidates a head start on step one: I.D. Voters know who they are and know they are running. The second step — Identity —makes them winners. Sáez’ identity was that of an outsider, as is Trump’s.

Once disenfranchised, denigrated voters find someone who reciprocates their outrage, they’re happy to take the third step: Investment. Meaning the candidate has their vote.

When the Sáez’ bubble didn’t burst there was panic at the possibility of a gravy train derailment. Just as is happening here now, both establishments scrambled to find a way to ooze into the outsider’s orbit.

Trump looks out his limo window and sees Sen. Chuck Grassley tapping on the glass trying to hitch a ride on the bandwagon. For Sáez it was the loathsome COPEI dumping it’s preferred miscreant and instead endorsing her candidacy.

Sáez response should have been an immediate and noisy rejection. Instead she made a disastrous mistake and accepted the mantle, which proved to be just a loan. Sáez support imploded as voters saw their outsider surrounded by the same old insiders.

She finished with 3 percent of the vote and had the additional indignity of seeing COPEI jilt her just before the election and support a third candidate.

Here the GOP establishment is cozying up to Trump because Ted Cruz is unthinkable as an alternative because he’s a genuine Constitutional conservative. As one GOP reptile told the New York Times: “We can live with Trump…there’s a feeling that he is not going to layer over the party or install his own person. Whereas Cruz will have his own people there.”

A disaster since influence peddlers and time–serving incumbents won’t continue to dip into the taxpayer trough under a Cruz administration.

Trump’s crucial test is the one Sáez failed. As far as the insider–loathing voter is concerned there’s not a dime’s worth of difference between Chuck Grassley and Lindsey Graham.

Yet Trump may not recognize that. After the Grassley wedged his way into the limo Trump told a rally, “You know what? There’s a point at which: Let’s get to be a little establishment. We’ve got to get things done folks, OK? Believe me, don’t worry. We’re going to make such great deals.”

That’s exactly the wrong response. Trump should have told Grassley and the insiders to join the illegals at the back of the line. If Donald doesn’t believe me he should check with Sáez. It won’t even be an international call.

She lives quietly in Florida now.

Support Conservative Daily News with a small donation via Paypal or credit card that will go towards supporting the news and commentary you've come to appreciate.
Tags
Irene Saez Politics Venezuela