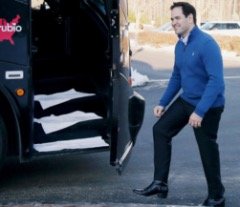 I don’t get it.  Since when did footwear become the hotbed issue of the presidential campaign?

Apparently so –  the New York Times went home page with it this morning:

As sartorial politics go, bootgate has eclipsed any other fashion story of the election thus far, including any fashion story related to the two female candidates, Hillary Clinton and Carly Fiorina.

Trump’s a New Yorker and he jumped right on the bandwagon:

“It helps to be tall,” Trump mused. “I don’t know, they’re big heels. They’re big heels. I mean, those heels were really up there. But you know, it’s almost like it doesn’t matter too much. Probably, he would have been better off not going that route

At a rally in New Hampshire, Rubio had no choice but to response to what is now being called “bootgate:”

“Let me get this right. ISIS is cutting people’s heads off, setting people on fire in cages, Saudi Arabia and Iran on the verge of a war, the Chinese are landing airplanes on islands that they built and say belong to them and what are international waters and in some ways territorial waters, our economy is flat-lined, the stock market is falling apart, but boy are we getting a lot of coverage about a pair of boots,” he said Thursday, grinning. “This is craziness. Have people lost their minds?”

Trump is doing it to make sure he ends up in the news cycle, the New York Times… because they never print anything relevant, why start now. Why America gives a crap about what boots Rubio wears .. I have no idea.

Support Conservative Daily News with a small donation via Paypal or credit card that will go towards supporting the news and commentary you've come to appreciate.
Tags
2016 presidential candidates Marco Rubio