A few surprises have surfaced for Thursday night as Fox released the candidate lineup.

The participants qualifying for the prime-time, 9 p.m. ET debate are:

While the stage positioning correlates well with polling results, center stage is not likely to have the ever-present Donald Trump as his campaign has confirmed that he will not be attending due to press statements from Fox centering on his feud with Megyn Kelly. 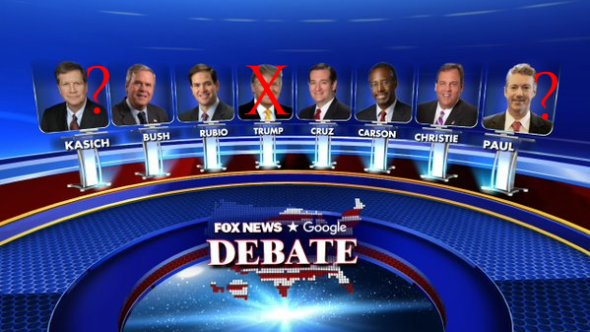 Another surprise is the re-emergence of Senator Rand Paul on to the main stage. Paul is expected to do poorly in the caucuses, but managed just enough in the polls to make the big show. Paul is in the main debate after having failed to make the cut for the last debate and deciding not to attend.

John Kasich is hanging in there .. somehow. There must be at at least a few caucus-goers that find his whiney, left-of-middle style appealing .. or something.