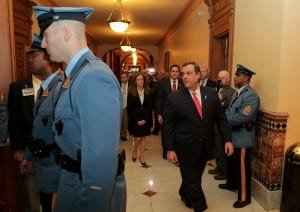 Gov. Christie derailed the progressive agenda item using a pocket veto under which no comment was necessary, anti-gun rights legislators were not as quiet on his decision.

“Gov. Christie has put special interests ahead of protecting children from gun violence. That’s deplorable. This bill was very simple — encourage the sale of personalized handguns that may only be fired by an authorized or recognized user,” Johnson ranted.  “This is, quite simply, an attempt to protect children from gun violence, especially accidental shootings, but the governor wasn’t even interested enough to act.”

Unfortunately, there isn’t any way to make sure that an item is only used “by an authorized or recognized user.” An old adage puts it succinctly, “A lock does no more than to keep an honest man honest.”1

Car makers have been trying for decades to prevent auto theft with transponder keys, touchcode pads and more. All of those cars get stolen just as soon as the criminals figure out how to create technology to defeat the technology. The only people that are limited by the technology are the honest folk .. like when the electronic control unit doesn’t recognize the key for whatever reason and you get to pay the dealer $80 to re-code it. At least that delay doesn’t keep anyone from defending themselves until a gunsmith can be found.

Scott Bach of the Association of New Jersey Rifle and Pistol Clubs  said, ““We welcome Governor Christie’s veto of this transparent ploy to force market acceptance of this dangerous and unproven technology, to facilitate a nationwide ban on conventional firearms similar to New Jersey’s 2002 ban.”

While Christie may be struggling in his run for President, his strength on defending the second amendment against the anti-gun “smart gun” ploy is a success.

1 – Farseer – Robin Hobb (there are other attributions, but this one rocks, original attribution seems to be unknown)