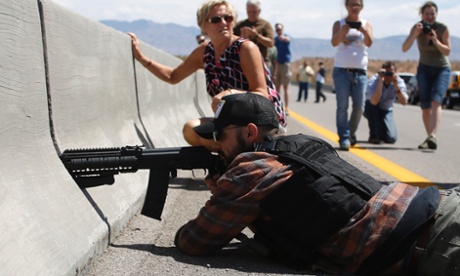 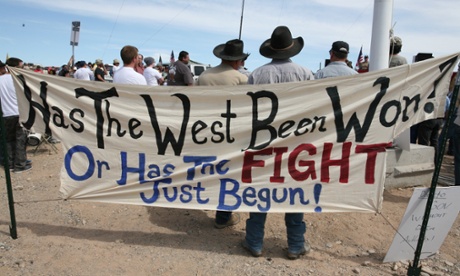 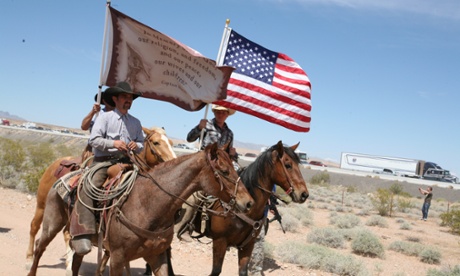 By now everyone is familiar with the standoff between the government and its’ citizens in Harry Reid’s Nevada with rancher Cliven Bundy. The government claims Bundy owes a million dollars on back grazing fees with his cattle and is on land designated for a protected tortoise species. Bundy claims it is not federal land, but state land and his family has been on that land since 1870 and  he should be grandfathered in and not pay any fees since he’s been there before the Bureau of Land Management (BLM)  even existed.  Cliven has not paid any fees and says he is willing to pay state and county fees, but not federal fees.  Cliven also says his cattle has not tread on any turtles and in fact cattle go around the turtles when they see them.

The government sent snipers and trucks and agents down on Bundy’s ranch and tasered   his son and pushed around and manhandled his sister. Local and state militias and people from other states arrived at Bundy’s ranch in support of him and a stand off between the government and its’ citizens ensued with government eventually pulling out. Yes as Tom Pacheco says in his song, “Something is uneasy in the air.”

According to an Associated Press report,  BLM, officials say “escalating tensions” led them to not only stop rounding up approximately 900 of Bundy’s cattle, but also release all 400 or so head already seized on public land the feds say Bundy can no longer use for grazing his herd.

That’s the outside story the media is reporting, but it goes much deeper than that.

The next day, Jan. 21, 2013, WND documented the Obama administration had begun to allow China to acquire major ownership interests in oil and natural gas resources across the U.S.A.

The first major intrusion of China in the U.S. oil and natural gas market can be traced to the Obama administration decision in October 2009 to allow state-owned Chinese energy giant China Offshore Oil Corporation, or CNOOC, to purchase a multi-million dollar stake in 600,000 acres of South Texas oil and gas fields.

By allowing China to have equity interests in U.S. oil and natural gas production, the Obama administration reversed a policy of the Bush administration that in 2005 blocked China on grounds of national security concerns from a $18.4-billion dollar deal in which China planned to purchase California-based Unocal Corp.

YES THE AMERICAN PEOPLE ARE FED UP!!!! They’ve had it with Obama’s big government oppression in their lives. They’ve had it with his NSA spying and their freedom’s and privacy rights being taken away. The American revolution started with the Boston tea party protesting against King George’s oppressive ways. Maybe the current tea party can start a second American revolution against Obama’s oppression.

Why do you think the government brought up all those billions of hollow point bullets? It’s either  so the people can’t buy ammunition in preparation  to take away their guns just as Hitler did or it’s to use against the American people when the revolution comes. In any event, something is uneasy in the air. What’s next?

Check out the on the scene video below of the stand off and retreat by the government and cattle being released. ;)