The late Andrew Breitbart declared “War!” on the establishment media and patriotic citizens mustered behind that raucous cry. The descent of mainstream media following years of misreporting, demonization of over half of the citizenry, and exculpation of an entire political party from wrongdoing, led to broken trust and the opening of people’s minds to new sources of information. The slow suicide of left-wing journalism provided fertile preconditions for an upsurge in civic participation.

The rise of the Internet provided the platform for New Media’s genesis, leading to an outpouring of creative and passionate content, both cultural and political. In many ways, the clash between New Media and Old Media was inevitable.

Much like the spontaneously arising Tea Party movement, New Media developed into a loose network of fellow-minded individuals and associations, whose common characteristic is they yearn to break free of cultural conformity and leftwing political correctness. It is not comprised merely of well-known alternative media outlets, but hundreds of thousands of bloggers and citizen journalists, who have self-organized in a version of the Swiss canton defense.

Instead of rifles, today’s New Media soldier carries a laptop or an iPhone.

This war we are engaged in is not bloody, but is a series of battles for the hearts and minds of the American people. The casualties are the broken dreams, lives unfulfilled, and talents unrealized of individuals due to the coercion of the state, whose wielders are primarily interested in political domination, wealth expropriation, and social control. The left’s main weapon in this war is deception.

The way the left-wing media ran cover for the president, while failing to fully vet him, has been a major spur for New Media to pick up the torch and hold the power elite accountable. As Breitbart stated at CPAC, “This year Obama will be vetted.”

Dispelling the Media’s Fog of War

Diversion and entertainment are indispensable weapons in the left’s campaign to keep people from understanding what is going on to their country. The sum effect of the media’s diversionary tactics is to create a “fog of war,” where many Americans are no longer able to see what is important or what is in their self-interests. This situation is eerily similar to the result of successful military and intelligence campaigns. As the Pentagon’s Dictionary of Military and Associated Terms puts it, “deception” is:

Those measures designed to to mislead the enemy by manipulation, distortion, or falsification of evidence to induce him to react in a manner prejudicial to his interests.

Deception has a long-standing place in politics and in warfare. Indeed, Clausewitz argued for the inseverability of the two concepts in his dictum, “warfare is the continuation of politics by other means.” Sun Tzu, the ancient Chinese military adviser, summarized that “All warfare is based on deception.” A few poignant historical allusions draw a parallel between the left’s assault on the nation’s institutions and militarized warfare.

The Biblical story of Gideon and his battle with the Midianites provides a powerful lesson for conservatives, albeit in reverse application. When Gideon found himself outnumbered by the Midianites outside their encampment, he ordered a dispatch of men to blow horns and smash jars to create the illusion that his army outnumbered them. The Midianites fled, and the victory was his.

Leftists are outnumbered, according to nearly every poll of political self-identification, but have to maintain the impression that they are in the majority through media repetition and ideological conformity.

Political correctness is the doctrine that keeps the left toeing the line. It is a kind of state-enforced group think meant to lead Americans into self-censorship and to keep them from speaking up when their actual rights, such as property rights, are being violated. The statists thus try to create a cultural milieu where reverence for constitutionally limited government is akin to hate speech.

It only follows, therefore, that tea party activists are referred to as “terrorists” and “insurgents” for merely seeking to preserve freedom in the country. That is because to statists, tea party activists are the enemies within. But these citizens are holding the breach against totalitarianism, the form of government the modern left assuredly wants.

Another military analogy, well-known to all computer users, is that of the Trojan horse. The mainstream media packaged Obama as a moderate, knowing full well he was a radical community organizer, and once the most left-wing voting member of the U.S. Senate — more so than even the self-described socialist Bernie Sanders. After the American people wheeled the offering into the White House, a gang of Chicago street thugs filed out and proceeded to take the taxpayers to the tune of trillions.

Despite this obvious debacle, millions of Americans refuse to change their initial impression of Obama that he is anything but a nice guy. This is actually a psychological phenomenon utilized in disinformation campaigns called Magruder’s principle. This holds that it is generally easier to get a target to maintain his belief system than to alter it. But the media have over-relied on this psychological weakness, and are starting to make mistakes.

The disparity between those who like the president personally, for example, and those who approve of his policies suggests that many of his professed supporters will simply stay at home on election day. This is due to cognitive dissonance, which immobilizes political action.

The sense of post-decision dissonance, or “buyer’s remorse,” will lead to less excitement and grassroots activity to re-elect the big-talking president, who has failed to deliver on his lofty promises of hope and change. To keep voters from fully realizing this indisputable reality, the media are lobbing countless distractions at the public.

The Politics of Distraction

Much of our political culture is designed to lead to irrelevant mental fixations. A farcical play is trotted out before the public, composed of diversionary tactics that entertain the attention of the undereducated and misinformed. These distractions act like five alarm fire bells going off while looters ransack the joint.

Identity politics are thus meant to pre-occupy us while statists plunder the economy. Notice how much attention the Trayvon Martin shooting received, although the state-run media definitely jumped to conclusions about the racial makeup of the shooter Zimmerman (calling him a “white Hispanic,” whatever that is).

While the FBI is trying to fabricate a “hate crime” for Zimmerman for maybe thinking a politically incorrect thought about Martin, there is a strong case to be made that Zimmerman acted in self-defense. Bruises on Martin’s knuckles and gashes on Zimmerman’s head suggest that the latter was assaulted before he pulled his gun, which he had a right to carry.

But never mind, the media seem to say, let’s convict the man based on his skin color and whatever he may have been thinking at the time. Let’s fabricate evidence and gin up race-based animosity that may even lead to a man being injured or even killed. What transpired during the investigation was an egregious display of journalistic malpractice punctuated by an extremely dangerous legal disposition.

The examples of identity politics being used to divide Americans, and reunite them on the left’s terms, are boundless. As a recent Newsweek article put it, written by the statist sycophant Andrew Sullivan, Obama is the “first gay president.” A subsequent Atlantic article pointed out that Obama has also been called the first female, black, Asian, and Jewish president. While Obama’s stance that he is favor of gay marriage has been lauded across the globe as “brave,” it does not change a thing policywise and is actually nearly identical with the despised Dick Cheney’s.

But that brings us to the point: What difference does it make if two gay men have their marriage recognized by the state, if the federal government is taking over the economy to the tune of trillions? All of these issues are idle fixations in comparison to the looming economic disaster. The upcoming debt ceiling debate again reminds us that our debt levels are out-of-control, and will actually engulf the entire economy around 2027 if they go unchecked. That is less than a generation away. We must engage the left with everything we’ve got to avert this imminent disaster.

The Battle for Hearts and Minds

There are signs springing forth suggesting that this battle can be won. It is a plain fact that most Americans no longer trust the Old Media. After selling us a bill of goods during the 2008 campaign, many people are either turning elsewhere for their news or doing their own research. At the very least, they are tuning Old Media out. Evidence for this is the left’s failed “War on Women” meme, which was quickly reversed into a “War on Moms” after Democrat operative Hilary Rosen gaffed during an attack on Ann Romney. Mitt Romney subsequently went from a sizable deficit to a recent lead among women voters.

Other attempts at luring Americans into preoccupation about trivial matters have failed as well. In violation of the fifth maxim of the U.S. Army’s manual on “Battlefield Deception,” the left has created too much noise, thereby frustrating its disinformation and distraction campaign. Everything is a war on this, or a war on that: on women, on dogs, on everything except war itself.

Americans are already experiencing battle fatigue from the long election campaign, and the left-wing base is proving difficult to rouse. Young people are concerned that only half of graduates look to find meaningful employment under Obama. The Occupy Movement’s campfires have fizzled out to a whining hiss. And the Democrats are in a Catch-22 of having to use over-the-top language to mobilize its foot soldiers, while risking the ire of moderates who prefer a more civil and cooperative tone.

The cynical employment of martial language by the left is no accident — radicals approach their political struggle within our country as a long-term war. That is why leftists don’t sympathize with our military, though they do with our enemies. Radicals, dictators, and Islamists share a mutual hatred and enmity towards the United States as it was founded. And towards anyone who defends the country on those terms to boot.

The organized left has spent too much time engaging in a Gramscian “long march” though the institutions of the country — the schools, the universities, the media, the courts — to simply let an “insurgency” like the tea party rise up and oppose them in the culture. The left has devised sophisticated psychological techniques to manipulate the “superstructure” in order to loot the economic “base.” Anyone who attempts to break this linkage will thus risk the wrath of the parasitical left and will likely be viciously attacked.

America is in a war of sorts; and elections are a way of settling political disputes short of actual war. Historically, elections were devised as  a way of ascertaining head counts of people who could be brought to bear in a war, should conflict openly break out into political violence. We need to be aware of this continuity of politics and warfare, and preserve our democratic republic as a way of preventing escalating social conflict. This ultimately entails a safeguarding of individual rights.

Victory in our struggle will come when each individual is free to speak his mind, explore his potentialities, and fulfill his utmost potential, so long as he does not impede the ability of his fellow citizens to do likewise. As the Paul Reveres of this generation, we must be prepared to ring our own alarm bells: one if by land, two if by sea, and three if by teleprompter.

Kyle Becker blogs at RogueGovernment, and can be followed on Twitter as @RogueOperator1. He writes freelance for several publications, including American Thinker, Misfit Politics, and OwntheNarrative, and is a regular commentator on the late night talk shows at OTNN. 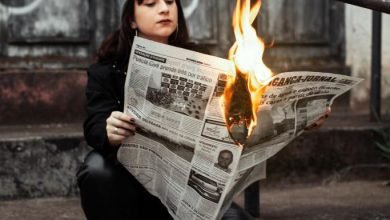 What If the Media Had Told the Truth? Five MSM Lies for Which Trump Has Been Vindicated, and the Damage They Caused