In the debate on illegal immigration – why we are debating is beyond me, because criminals are criminals – Americans are being labelled as lazy and cast as unwilling to perform jobs requiring manual labor.

I believe there are millions of Americans who would strongly protest that. Among them are the approximately 130,000 Americans currently serving in Iraq and Afghanistan at any one time, along with many more that have also done tours, patrolling the terrain in full-body armor and full combat loads. Body armor alone is 50 pounds, 120 rounds of ammo is about 20 pounds, an M-16 is 7 pounds, Kevlar helmet, water, and MRE and other gear adds up to 15 to 25 more pounds. Now go about for a day or more with all that. Oh, and let’s not forget, people are trying to kill you the entire time.

How many Mexican or Central or South American military personnel are in these areas? ZERO. Why not?

Mexicans are so willing to do the jobs that no one else wants to do? Well, there is genocide in Darfur that no one in the world wants to dirty their hands with. Is Mexico sending peacekeepers? NOPE. Rwanda, Somalia are still all hell holes: Mexico, ya’ll wanna head over there and help out?

I’ve been to Korea. I didn’t see any Mexican troops over there helping guard the DMZ. Maybe Vietnam could have been different if 12 million illegals had helped out instead of only thinking of themselves. It would be a great help if Mexico and all points south would help in the War on Terror.

World War II should have been called “World War II Minus Mexico.” The only thing the Mexicans did was not take Hitler up on the plan to invade the United States. Later though, South America countries helped out by taking in all the Nazis on the run. Good work there, guys.

So, I guess the people south of us are really brave, marching in our streets, demanding rights as full citizens, -with all the freebees that comes with that privilege- and amnesty, but they sure are cowards when it comes to making any changes in their own corrupt countries or helping out in the world stage of events. I would have so much more respect if Mexico City had throngs of people in the streets demanding all from that government as they do from ours. But no they instead take the easy road riding the wave of entitlements and knowing fully that there are few if any repercussions to demanding more and more in our American city streets and if anyone should dare to challenge the illegals and their enablers all that has to be done is declare the charge of RACISM. Is it any wonder the chihuahua is the preferred dog? All bark and no bite.

Are any countries in this hemisphere besides Canada doing anything to help out the rest of the world? Is there a single thing coming from down south that we actually need?

Several countries to our immediate south are going down the gutter. Is anyone down there doing anything to fix it? Heck no. They are bailing out like rats, and at the same time re-creating the same failed environments here.
America has been so helpful in bailing out these corrupt governments for so long they now expect it – just as our welfare people do here. They don’t want to earn it, but have the mentality that we “owe” it to them. America is nothing more than a blank check to the world now. These other countries are all grown up; it’s time to let them fail or succeed without us.

Let’s fix ourselves, starting with voting out all these political glad-handers and getting some people who can actually solve a problem or two.

Ask anyone in across the country that has lost his job in construction to corrupt contractors who want to cut costs by using illegal workers. If there were no illegals, people could make a decent wage. My stepfather was a block mason making $24 an hour in the 80’s and 90s. Now, no one gets more than $10, yet the cost of living has tripled.

These American workers have been robbed of a higher standard of living, a standard of living that was actually being earned as opposed to a tax payer funded handout, by the greedy back-room dealings of politicians seeking to enrich themselves no matter the cost to the country. Seems to me only the wealthy Hollywood Liberals are using the illegals as nannies and house help, so of course they will be against deportation. God forbid they spend time with their own kids, or maybe do their own laundry. Perhaps they are just practicing for how they want to treat the rest of us lowly hicks that live between New York and California, as peasants that need to serve their betters.
Any fool who says we need illegals needs to take a look outside their bubble, because we don’t. To say we need them is the same as saying we need sweatshops and forced prostitution. Do we really need indentured servants? Is that what the liberals are saying? Are they saying we need not worry about ghettos in our towns? Well, as long as they are not in their towns, right? Some cities are passing resolutions to be safe havens for illegals. I cannot wait for the floods of people to hit them up.

Don’t tell me Americans are lazy. It looks to me like we are doing the jobs that no other country in the world wants to do. We send our money to save people, we send food, and most of all we send our children to defend and protect the same people who would gladly stab us in the back. We put up with being called racists while saving Muslims in Croatia from genocide and helping out the very illegals that plan to take parts of our nation. We are called warmongers for keeping the battles away from the American streets, instead fighting where the people who hate us live. We Americans protect a land that has not seen war on its own soil in more than 100 years. What other nation can say all that?

Now we have an Administration that calls our own veterans and tea party protesters threats while ignoring all other true dangers. Yet we Americans will continue to put the burden upon or own backs and trudge forward, doing the work no one else wants to do.

Lazy? Well, I’ll take lazy over a coward any day. 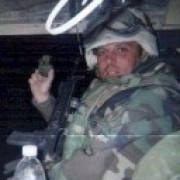