The Catholic Charities Bureau of the Diocese of Superior (CCBDS) filed a petition for review with the Wisconsin Supreme Court after it was unable to obtain religious exemption status for unemployment benefits due to an appeals court ruling the charity wasn’t religious enough, according to the petition.

Wisconsin law allows organizations to apply for a religious benefit under the state’s unemployment benefits program if the organization “operate[s] primarily for religious purposes,” according to the petition. When CCBDS attempted to apply for the exemption, however, the organization was informed by the Labor and Industry Review Commission (LIRC) and the Department of Workforce Development (DWD) that its mission is not exclusively religious, prompting the charity to file a lawsuit in 2016 that most recently landed at the state’s Supreme Court.

A Wisconsin appeals court ruled that CCBDS’ mission did not “[operate] primarily for religious purposes” and, therefore, did not meet the requirements to obtain an exemption under Wisconsin unemployment benefits law, according to a December 2022 opinion. In the petition filed Thursday, Becket Law, representing CCBDS, argues that the lower court’s reasoning is “deeply flawed.”

“First, it … ignor[ed] the primary religious purpose of the church that directs and controls them,” the petition stated. “Second, the court of appeals held that the religious purposes exemption requires reviewing bodies to look not only at the nonprofit organization’s purpose or motive but also … determine whether those activities are ‘inherently or primarily religious.’”

“As our Diocese’s social ministry arm, Catholic Charities Bureau and their subsidiary ministries provide essential resources to the most vulnerable members of our community,” James Powers, bishop of the Diocese of Superior, said in a press release. “These ministries carry out the redeeming work of our Lord by reflecting gospel values.”

While the December ruling posited that CCBDS’ mission to serve the “poor, disabled, and hungry is not ‘inherently’ religious,” CCBDS’ brief filed with the state supreme court stated that a “secular court” misunderstood what makes an act religious.

“It is not about how closely tied the physical action is to a form of religious worship, or even whether the ministry serves only [church members],” the petition read. “Whether caring for the poor or comforting the afflicted is ‘religious’ cannot be determined without looking at that action in the context in which it is performed.”

The petition asks the state Supreme Court to overturn the appeals court’s ruling to “preserve church-state relations in Wisconsin.” If allowed to remain, the petition argues, it would allow the government to make “intrusive inquiries” into the church affairs of many religious groups and decide whether or not those groups are religious enough.

LIRC and DWD did not respond to the Daily Caller News Foundation’s request for comment.

The Feast of Saint Stephen, The First Martyr & The Holocaust 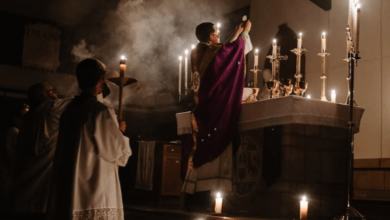