U.S. Customs and Border Protection (CBP) has ended the COVID-19 vaccine mandate for its personnel, according to a memorandum exclusively obtained by the Daily Caller News Foundation.

“CBP is halting the COVID-19 screening program, and employees may choose to withdraw their pending reasonable accommodation requests for screening exemption,” an internal CBP memorandum stated. National Border Patrol Council President Brandon Judd confirmed to the DCNF that both the vaccine mandate and testing requirements have been lifted.

President Joe Biden issued the mandate for all federal employees via a Sept. 9 executive order. Border agents who didn’t get vaccinated and didn’t have approved exemptions faced possible termination, two active agents and a union official previously told the DCNF.

Due to a court order, CBP paused the vaccine requirement in January in favor of Texas’ push to block the mandate.

But the latest move makes some unvaccinated agents feel like their battles against the mandate, the ostracization from their fellow agents and fears that they’d lose their jobs were all for naught, four of them, all from different sectors of the southern border, told the DCNF on the condition of anonymity out of fear of retribution.

“It frustrates me,” one Border Patrol agent fighting the mandate with a pending appeal for a religious exemption told the DCNF.

“It boggles my mind that the agency was ready to lose maybe about half of its workforce during this crisis that we’re having right now at the border. I just didn’t understand that they were willing  to reprimand these guys or even dismiss them or fire them going through this crisis at the border,” the agent added. 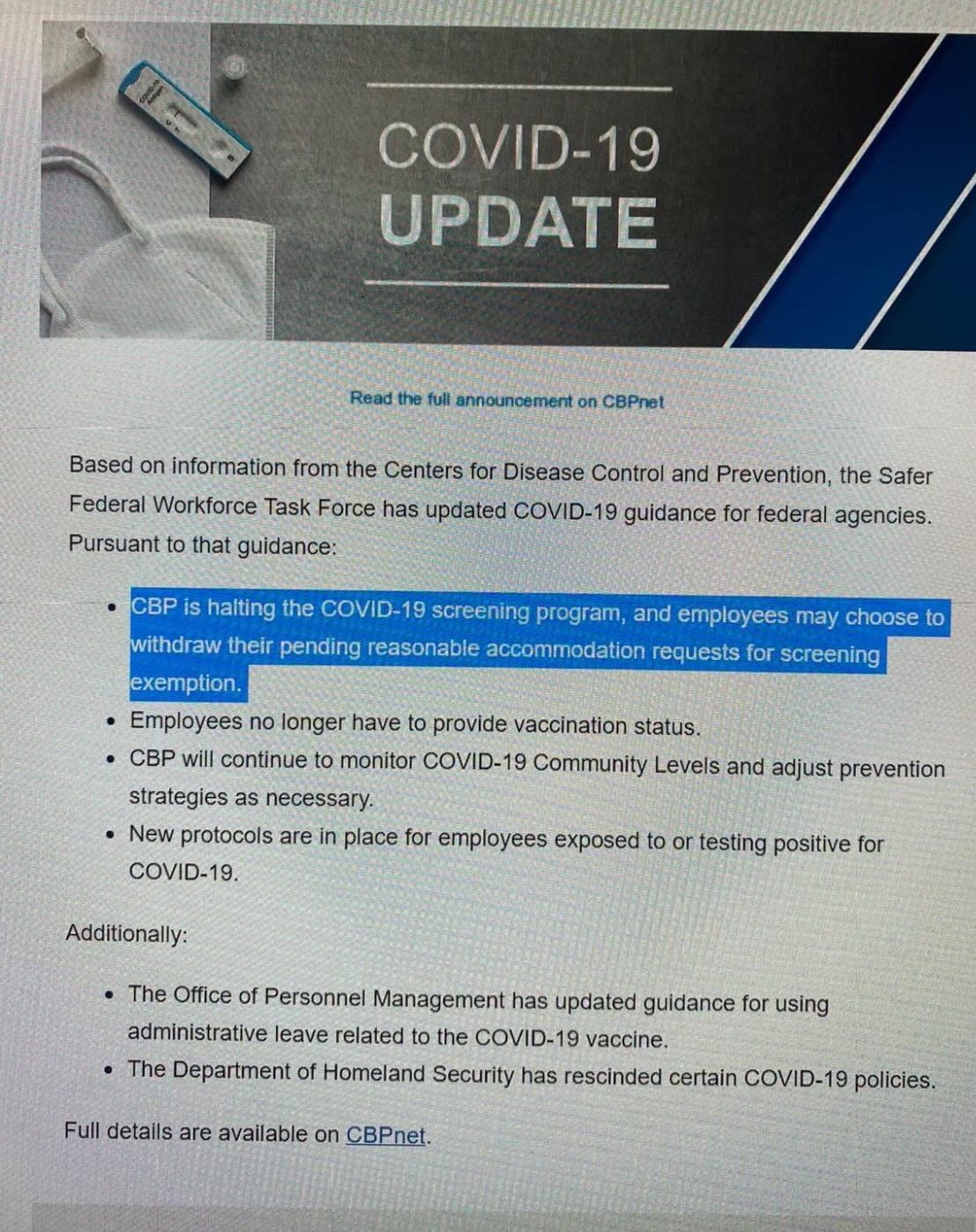 CBP leadership has realized it was fighting a losing battle, a second Border Patrol agent, who requested a religious exemption, told the DCNF.

“Management is finally backing down because this is a fight that they’re not going to win. I think this is a huge win for people that didn’t get the vaccine. It’s almost like a relief,” the agent said.

The record surge in illegal migration in fiscal year 2022, when CBP encountered roughly 2.3 million migrants, has only made matters worse for the workforce, especially those threatened for not getting the jab.

“It doesn’t even feel like we’re the sworn agents that we were developed and made out to be … we’re the guys that are protecting the border. It’s like they don’t even care. We’re not even like people to them. At this point. It’s just a statistic,” a third agent requesting a religious accommodation said.

“It does very much feel like we’re being tossed around and like our lives don’t matter. We’re talking about people with families, with medical issues, prior medical issues, monetary issues, there are some people that live check to check, and the patrol is going to burden them with termination. That was insane. You got to be kidding. We’re at this point now.”

A fourth agent, who fought against the vaccine mandate on both religious and medical grounds, said other than one superior, they’ve not faced too much scrutiny over the fight for an exemption.

“The rest of them, they understand it’s bullshit,” the agent said.

Support Conservative Daily News with a small donation via Paypal or credit card that will go towards supporting the news and commentary you've come to appreciate.
Jennie TaerNovember 11, 2022
0
Facebook Twitter Reddit Telegram Share via Email Print