Crux’s Sr Editor John L. Allen Jr. Writes that Pope Francis does not understand America.  Allen writes in part: “It’s said of the pope that he doesn’t understand the United States, and that what he does get, he doesn’t especially like. Many of his bishops’ appointments seem deliberately calculated to upset the dominant ethos of the American church, and some of his policy decisions also seem designed to challenge certain aspects of the American Catholic experience.” Allen appears to not understand the Church or deliberately misrepresenting her to advance his agenda – The onus is not on the Pope to understand the American Church, but for the American Church to understand its place in the Catholic Church The Church is Catholic. 1 Corinthians 10:17 says “And though we are many, we all eat from one loaf of bread, showing that we are one body.”

The core beliefs of Catholicism are found in the Nicene Creed. The Catholic Church teaches that it is the one, holy, catholic and apostolic church founded by Jesus Christ in his Great Commission, that its bishops are the successors of Christ’s apostles, and that the pope is the successor to Saint Peter, upon whom primacy was conferred by Jesus Christ. It maintains that it practices the original Christian faith taught by the apostles, preserving the faith infallibly through scripture and sacred tradition as authentically interpreted through the magisterium of the church

Meanwhile, W. Joseph DeReuil opines that “the Supreme Court’s overturning of Roe v. Wade last month dealt a significant blow to legalized abortion, a social evil that the U.S. bishops have reaffirmed as recently as 2020 is a “preeminent threat to human life and dignity” in American society. But the response by some Catholic entities, including some Vatican officials, has been relatively muted. They have used the opportunity to highlight gun violence, the death penalty and other social ills rather than stressing the evil of abortion.” The Reuil is not alone. Many others, including Carl DeMarco in his piece titled No Comment: Pope Francis Remains Silent On Supreme Court’s Abortion Decision? raised the same question, as I did, initially. The answer to Reuil et al’s question is found in the piece Understanding Pope Francis “No Comment” on RvW SCOTUS Decision
ETWN NCRs Larry Chapp takes it even farther. He characterizes Pope Francis Desiderio desideravi as a big Nothing Burger, whereas Will Wright wrote in his easy titled: What You Should Know About Pope Francis’ Apostolic Letter on The Liturgy – Desiderio Desideravi writes “Pope Francis begins this beautiful and relatively short reflection on the beauty, goodness, and truth of the Sacred Liturgy by reminding us of the Most Holy Trinity’s love for us and desire for us.” Edward Pentin in his piece Vatican Inconsistencies: A Tale of Two Bishops, which is merely recycled news expresses his discontent with Pope Francis selection of new Cardinals.

These are not just random hit pieces and it’s now just about liturgy wars.  More like the media’s war on Pope Francis continues.

Support Conservative Daily News with a small donation via Paypal or credit card that will go towards supporting the news and commentary you've come to appreciate.
Tags
Canada pope francis 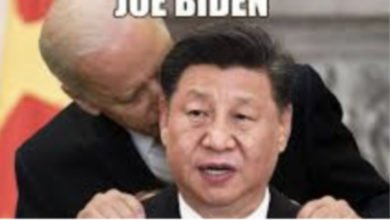 Never Have We Had Such a Compromised President