It looks like Secretary of Labor Eugene Scalia is tired of dining in relative peace and obscurity and he’s decided to pick a fight with the people serving his food. 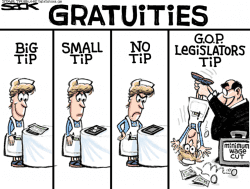 Eric Trump has been spit upon by a waitress in Chicago. Curator of the Senate Mitch McConnell and his wife Secretary of Transportation Elaine Chao were confronted at a Louisville restaurant. And former hand–wringing Secretary of Homeland Security Kirstjen Nielsen was heckled as she tried to eat at a Mexican restaurant (which if you ask me was a risky ethnic choice in the first place).

And none of the above had done anything to interfere with the livelihoods of restaurant personnel, give or take the odd deportation.

Scalia, on the other hand, is preparing to launch a preemptive strike on wait staff employees that will limit his dining out options to the department’s in–house cafeteria — assuming he can send a lackey to pick up his lunch.

The Wall Street Journal reports the Labor Dept. is proposing a new rule that would let restaurant owners steal tips more easily and more frequently than the busboy who swipes a few of the waitress’ tip dollars as he cleans the table.

“Businesses would more easily be able to require workers to share tips under a Labor Department proposal released Monday. The rule would allow employers to require workers such as restaurant servers to pool tips with colleagues who traditionally don’t get tips, such as dishwashers and cooks.”

Notice how businesses have no objection to restaurant socialism when they aren’t forced to participate.

This isn’t a strictly intramural conflict. Restaurant customers also have a dog in this fight. I wrote recently about restaurant reviewers — who eat and tip on the company dime — demanding diners pony up regardless. The WoePost’s reviewer was quite clear, “Poor service? You still have to tip 20 percent, no matter what.” This benevolence–by–proxy insulates him from the cost of his bright idea and transfers the expense to other easily persuaded leftists.

Even if a weak–willed diner let Mr. WoePost badger them into participating in this virtue extortion scheme, the customer knew who was getting the money. Scalia’s proposed rule even takes that small bit of agency away.

One of the few positive actions the Obama administration took was attempting to ban this tip–skimming scam in 2012 and now Scalia wants to bring it back. Evidently, he hasn’t gotten the word that Trump decided Republicans don’t have to reflexively support big business whenever it wants to gouge another penny or two from the staff and customers.

This is an echo of the WoePost critic’s mandatory tip regime, “I think there is a fundamental misunderstanding about tipping in America. Diners have been led to believe that tipping should be based on the quality of the service. But this is not the reason we tip. We tip because restaurateurs in America have shifted the burden of paying for some of their labor costs to diners. So when you don’t tip, it affects the wages of servers.”

This changes a night on the town into a GoFundMe shakedown. If business is worried about the behind–the–scenes staff not making enough money, restaurant owners should stop picking the wait staff’s pocket and give them a dang raise!

This tablecloth piracy affects customers in two ways. First it removes the server’s prime motivation for giving exemplary service. Why go out of your way to make a customer’s dinner experience outstanding when Hugo Chavez is going to sieze your tip money anyway? Second you may be giving a bonus to the guy who burned your steak.

Free market capitalists should be outraged by this new imposition on the exemplary working man. It imposes a hidden tax on servers that hits the hardest working the most and it allows restaurant owners essentially to pay their best employees the least. You make up the rest.

It appears there is something about the food industry that brings out the cannibal in management. Even woke tech companies are repurposing (stealing) your tips. The WoePost found “DoorDash …recently made headlines for using customers’ tips to offset workers’ wages.”

What that means is if a DoorDash serf is guaranteed a $10/hr. wage and you tip your delivery person $5, DoorDash overseers count that as half his wage, only pay him an additional $5 and the Internet titan in effect embezzles your tip.

I hope Tucker Carlson mentions this on his show so Trump will veto the policy. Otherwise, restaurant customers are going to get great service in the future just like Venezuelans get reliable electricity.