Posted by: Jim Garamone in In The News, Military and Defense, Syndicated Posts, US News October 27, 2019 Comments Off on U.S. Forces Take Down ISIS Founder, Leader Baghdadi in Syria 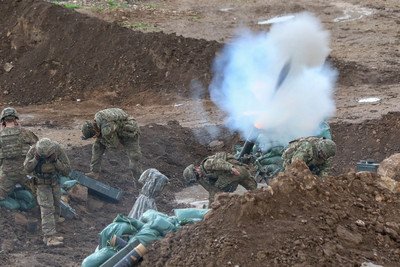 The “daring and dangerous raid” went off without a hitch, Trump said. There were no casualties among the American forces.

“Baghdadi’s demise demonstrates America’s relentless pursuit of terrorist leaders and our commitment to the enduring and total defeat of ISIS and other terrorist organizations,” the president said.

Baghdadi was arguably the world’s most-wanted terrorist. He was the founder and leader of the Islamic State of Iraq and Syria.

ISIS — an outgrowth of al-Qaida in Iraq — exploded onto the scene in 2014. The group took advantage of the Syrian civil war to take territory and proclaimed itself a caliphate.

The terror group ruled from its capital of Raqqa, Syria. It held vast swaths of territory in Syria and Iraq — including Mosul, Iraq’s second-largest city.

“The United States has been searching for Baghdadi for many years,” Trump said from the White House. “Capturing or killing Baghdadi has been the top national security priority of my administration. U.S. special operations forces executed a dangerous and daring nighttime raid in northwestern Syria and accomplished their mission in grand style.”

Trump said he watched much of the raid from the White House Situation Room, and he called the U.S. forces who executed the raid “incredible.”

Trump said Baghdadi was trapped in a dead-end tunnel and exploded a suicide vest that killed him and three children.

“His body was mutilated by the blast; the tunnel had caved in on it, … but test results gave certain, immediate and totally positive identification it was him,” Trump said.

“The thug who tried so hard to intimidate others spent his last moments in utter fear, in total panic and dread, terrified of the American forces bearing down on him,” the president said.

The American forces also took information and material from the compound that will be exploited moving forward, Trump said.

“Baghdadi’s demise demonstrates America’s relentless pursuit of terrorist leaders and our commitment to the enduring and total defeat of ISIS and other terrorist organizations,” he said.

U.S. support to indigenous forces in Iraq and Syria led to the defeat of the physical caliphate in March. The group has been attempting to reconstitute itself as a terror group. The raid yesterday is a reminder to all that the United States and like-minded nations will not let this happen, the president said.

“This raid was impeccable, and could only have taken place with the acknowledgment and help of certain other nations and people,” Trump said. “I want to thank the nations of Russia, Turkey, Syria, and Iraq, and I also want to thank the Syrian Kurds for certain support they were able to give us. This was a very, very dangerous mission.”

0
Previous: John Ratcliffe: Change In Status Of Durham Investigation Is ‘Not A Coincidence’
Next: President Donald Trump’s Schedule for Monday, October 28, 2019