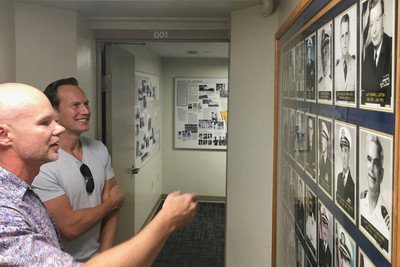 The Battle of Midway was one of the most pivotal of World War II in the Pacific, and a major film depicting its events is about to hit the big screen. Defense Department historians who helped from start to finish say “Midway” does justice to the integrity, accountability, and toughness of everyone involved in the real June 1942 battle.

Written by Navy veteran Wes Tooke, “Midway” follows the war from the attack on Pearl Harbor through the Battle of Midway, which ultimately changed the tide of the war in America’s favor. The narrative follows two naval officers and includes several critical role-players, including Adm. Chester Nimitz, Gen. James Doolittle and Adm. William Halsey.

“I wanted to showcase the valor and immense courage of the men on both sides and remain very sensitive to the human toll of the battles and war itself,” said director Roland Emmerich, who visited Pearl Harbor in 2016 to see firsthand the historic bases, facilities and memorials that framed much of the war in the Pacific.

Historians from the Naval History and Heritage Command helped writers and producers during script development and production. The goal was to make a movie that was as accurate as possible — give or take a few small Hollywood-style inconsistencies — and the historians who helped said they were impressed with the final product.

“Despite some of the ‘Hollywood’ aspects, this is still the most realistic movie about naval combat ever made,” said retired Navy Rear Adm. Sam Cox, the NHHC director who personally supported each phase of the historical review. “It does real credit to the courage and sacrifice of those who fought in the battle on both sides.”

The actors portraying the real heroes were committed to getting it right, too.

Woody Harrelson played Nimitz, who took control of the U.S. Pacific Fleet after Pearl Harbor. In preparation for the role, Harrelson called on Navy Rear Adm. Brian Fort, commander of Navy Region Hawaii at the time, for help in understanding the man Nimitz was and the decisions he made.

“Admiral Nimitz came in at an extremely difficult time for the Pacific Fleet. It was really important for Harrelson to understand not just the man, but the timing of his arrival and the urgency of the situation for the Navy and nation,” said Jim Neuman, the Navy Region Hawaii historian who arranged the meet-up and spent time on the set during filming.

Harrelson also visited USS John C. Stennis while the ship operated in the Pacific. He got a close look at air operations at sea, saw the launch and recovery of various naval aircraft and spent time on the navigation bridge watching its operators. Harrelson also met with sailors and even played piano at an impromptu jam session. 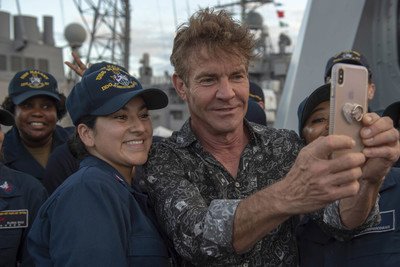 “We were thoroughly impressed with the amount of research he had conducted on his own, and it’s evident he is committed to honoring Layton’s legacy,” said Dave Werner, who escorted Wilson during the visit.

“Midway” is set to hit theaters Nov. 8, ahead of Veterans Day.

Support Conservative Daily News with a small donation via Paypal or credit card that will go towards supporting the news and commentary you've come to appreciate.
Press OperationsOctober 30, 2019
Facebook Twitter LinkedIn Share via Email Print