Posted by: Jim Garamone in Military and Defense, Syndicated Posts, US News October 11, 2019 Comments Off on McCarthy Pledges To Be Army Secretary Soldiers Deserve 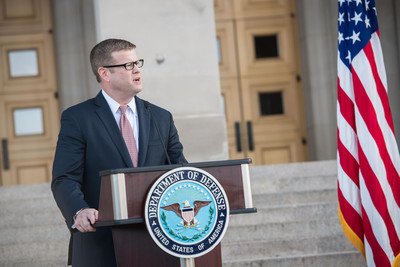 Ryan D. McCarthy pledged to be the Army secretary that soldiers deserve as he took the oath to be the 24th person in the job.

Defense Secretary Dr. Mark T. Esper swore in McCarthy before a stand of colors on the steps of the Pentagon. The campaign streamers on the Army flag reflected the history of both the service and the country.

We will modernize, we will remain the most lethal fighting force in the world. We will take care of each other as family. We will remain ready, and when called upon, we will win.”

The streamers for the war on terrorism have special significance for McCarthy, who served as a young officer in the 75th Ranger Regiment during the liberation of Afghanistan.

Esper, a combat veteran himself, said McCarthy is uniquely qualified and cited the new secretary’s experience working with then-Defense Secretary Robert Gates, his time on Capitol Hill and his time with industry.

”Having successfully rebuilt much of the readiness that was lost over several years of insufficient budgets, the task now is to modernize the future warfare,” Esper said. ”I know the Army is hard at work on an updated modernization strategy that will serve as the blueprint for the force needed to fight and win in that environment. As the service continues to advance important reforms in areas such as acquisition, talent management and budgeting, I have no doubt the Army will set the standard for the Department of Defense.”

McCarthy said he feels a sense of urgency in the bones of the Pentagon. The building itself was rushed to completion in a bit more than a year when the United States entered World War II.

”Today, the storm clouds gather once more,” McCarthy said. ”Our adversaries, unconstrained by a continuing resolution, are investing to rapidly modernize, increase reach and lethality, and, ultimately, to change the balance of power in the world. Our adversaries hope in earnest that we fail.”

That sense of urgency is paramount and must be maintained, McCarthy said, and he quoted legendary basketball coach Bobby Knight, who said, ”The key is not the will to win. Everybody has that. It’s the will to prepare to win that is important.”

As he walks the Pentagon hallways he repeats a mantra he learned from a soldier two years ago in Iraq, McCarthy said. ”’Be the secretary we deserve,’ and I vow to be just that. We will modernize, we will remain the most lethal fighting force in the world. We will take care of each other as family. We will remain ready, and when called upon, we will win.”

0
Previous: Update on the Whistleblower(s)
Next: President Donald Trump’s Schedule for Saturday, October 12, 2019