(The Census marks yet another cut–and–run by Trump, but I hate to waste a column.)

The Associated Press Gotcha Patrol has discovered President Trump’s Facebook man–in–the–street campaign videos are using actors instead of supporters. Even worse many of the streets are in Turkey or Paris. 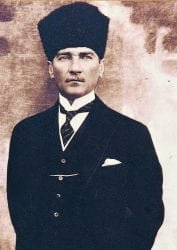 Take the bearded “Thomas from Washington,” who is more likely Mohammed from Izmir. Thats a city in Turkey, a country that’s barely an ally, much less a supplier of hipster endorsers of Trump.

Mohammed says, Trump is “in our prayers for strength and wisdom from God almighty.” Substitute Erdogan for Trump and Allah for God and the ad’s veracity is absolute.

Reporter Bernard Condon has a valid point when he writes, “[Using actors] raises the question why a campaign that can fill arenas with supporters would have to buy stock footage of models.”

The use of models is a shortcut. A shortcut any experienced political ad maker would not take because of the potential for stories like this. As GOP media consultant Fred Davis remarked, “Whoever did this is probably 22 years old, and they’re going through pictures and thought, ‘This is a great picture.’”

Using normal people for commercials means finding someone who is camera–worthy, articulate and will pass a background check. The process involves travel, recruitment and hours in the edit bay taking snippets of the interview and building an ad. And that’s just before the commercial airs.

After the broadcast the campaign ad team has to hope the supporter isn’t arrested, hit with a restraining order or changes sides and endorses the opponent.

The use of overseas models all those variables, besides I thought the Opposition Media was in favor of global free trade.

Realistically, Trump’s use of paid models is just as authentic as his promise to build a wall, stop illegals crossing the border and deport the illegals already in the USA.

Which brings us to the latest adventure of the Gang That Couldn’t Administer Straight.

Since the Dept. of Commerce is part of the executive branch and is in charge of the census, determining what questions are asked should be a routine executive function.

Unfortunately for the slapstick Trump he’s in a governmental civil war and as Carl von Clausewitz posited, “War is very simple, but in War the simplest things become very difficult.” Adding a citizenship question that asks, “Is this person a citizen of the United States?” in this environment is the very definition of simple but difficult.

The census is crucial because it determines the number of congressmen each state has and it’s used as part of the formula for federal handouts. Counting illegals and other aliens gives political power to leftist sanctuary states at the expense of states that don’t go out of their way to welcome a criminal class.

The administration should’ve been prepared for a court challenge. Commerce either was not prepared or — in keeping with usual Trump personnel office polices — it picked a team of Resistance collaborators to defend the question.

The Supreme Court upheld previous rulings deporting the citizenship question, although Chief Justice John ‘The Weathervane’ Roberts gave Trump an out when he said the administration could resubmit the question with a justification that made sense.

The Tweeter–in–Chief may have realized that voters might cut you some slack on building a giant border wall. They could understand how deporting 29 million illegals would require some preparation time. But dropping the ball on a nine–word question was something else again.

Trump tweeted he was “absolutely moving forward” with the question.

Currently in–house Resistance is telling Trump no can do. It’s imposible! The administration must move muy pronto to make the deadline. This is correct only if lawyers move at their usual foot–dragging, government worker speed.

Trump and his micro attention span are in the driver’s seat. The Resistance has thwarted Trump when he wanted to take an action, they don’t have a response to inaction. Trump can simply sit on the census until he gets a questionnaire that’s best for citizens and not criminals nervous about being caught.

When you get right down to it, delaying the census beats accelerating the takeover by illegals.