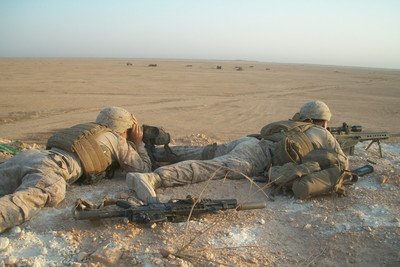 Becoming a Marine Corps scout sniper is far from easy.  Sgt. Brandon Choo, an instructor at the Basic Scout Sniper Course at Quantico, Va., says only the best candidates graduate. Those who earn the title of Marine scout sniper will have to prove that they are expert marksmen and have what it takes to make their way into enemy territory, undetected, and serve as a commander’s eyes and ears.

What motivated you to become a scout sniper?

First and foremost, I wanted to fight the enemy. As a young private first class, when I would talk to other people within 3rd Battalion, 7th Marines, I quickly figured out that the most engaged unit was the Scout Sniper Platoon. I also learned what significant role a sniper conducts on the battlefield to support the other infantry units physically and mentally, which allows them to execute their mission safely and successfully. A sniper can greatly degrade the enemy’s will to fight as their personnel are killed with precision direct fires, as well as improve other Marines’ morale when they know that they have sniper overwatch. I also recognized how physically and mentally demanding it would be to become a scout sniper, and I wanted to challenge myself.

What is one thing about a scout sniper that might surprise people?

I think it would surprise most people to learn that only 10% of our job actually involves shooting. Scout snipers will typically conduct many hours (or days) of battlefield observation that will be reported to higher commanders that they can use to finalize battle plans or set conditions for other Marines to cross the line of departure.

What is the most difficult part of your job?

This profession as a whole constitutes a difficult lifestyle where we have to get up every day and train harder than the enemy, so that when we meet him in battle we make sure to come out on top. No matter what adversity we may face at the end of the day, we aren’t dead, so it’s going to be all right. As a scout sniper, we are going to be constantly tired, fatigued, dehydrated, probably cold, for sure wet, and always hungry. It’s all difficult but not impossible, and really, once you embrace it, you develop resiliency and then nothing really bothers you after a point.

What is the most rewarding?

The most rewarding aspect of my job as an instructor is being able to teach. Regardless of if a student passes or fails, as long as he learns something that improves his lethality or survivability in combat, I am personally satisfied. Especially as the primary marksmanship instructor, I know that if I can train these Marines to kill the enemy, I am accomplishing my mission. Every time a student here pulls the trigger, he is training to kill another human being, and if he kills him, then other Marines will live, which is why it is so important for me to be successful.

Do you think your time in the Marine Corps will help you succeed as a civilian?

Yes. While I most likely would lack any serious job skill or experience, unless it’s for some sort of security or contracting job, I still have learned how to be disciplined and how to work hard. I joined the Marine Corps right after I turned 17 years old and was essentially no different than any other spoiled teenager in the United States today. However, now my experiences have given me a different perspective on life and a strong work ethic, so that I know if I were to leave active duty, I would be wildly successful in a private-sector job.