This Army Unit’s Motto is Now a National Day

Posted by: Press Operations in Military and Defense, Syndicated Posts, US News April 4, 2019 Comments Off on This Army Unit’s Motto is Now a National Day 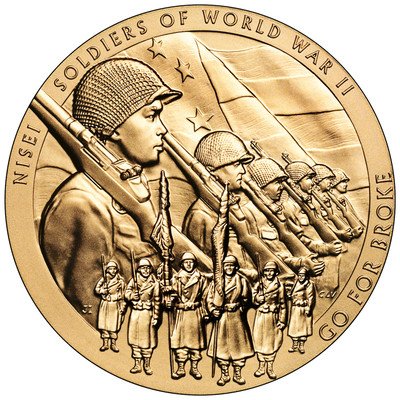 Every year, April 5 is celebrated as National “Go For Broke” Day, derived from a saying that’s known to mean “wager everything.” “Go For Broke” also happens to be the motto of one of the most decorated units in U.S. military history, the Army’s 442nd Regimental Combat Team, and they’re likely the reason why this celebrated day exists.

The 442nd RCT was a segregated World War II unit made up entirely of Americans of Japanese ancestry, which was a big deal since they were barred from military service at the start of the conflict due to fears stemming from the Pearl Harbor attack. Japanese Americans, known as Nisei, couldn’t enlist in the armed forces, and hundreds of thousands of them were relocated into internment camps out of distrust.

But many Nisei still wanted to serve America. They were eventually able to do so through the 100th Infantry Battalion, the 1399th Engineer Construction Battalion, the Military Intelligence Service, and the 442nd RCT — which became the most decorated military unit of its size and length of service.

The 442nd RCT was activated Feb. 1, 1943, and was composed of Nisei men who had volunteered from Hawaii and internment camps on the mainland. They trained at Camp Shelby, Mississippi, before deploying to Italy in June 1944, where they joined in combat with the 100th Infantry Battalion — the first Nisei Army unit to be activated in the war.

In the following two months, the 442nd RCT earned nine Distinguished Service Crosses, while the 100th earned three. By mid-August, the 100th officially became part of the 442nd RCT. That’s when “go for broke” became their motto.

The men of the 442nd RCT fought so well that, in September 1944, they were reassigned to the invasion of southern France under the 7th Army and took part in the drive into the Vosges Mountains. During four weeks that fall, they liberated Bruyeres and Biffontaine and also rescued a battalion that had been cut off from its division.

For several more months, the 442nd RCT guarded the French/Italian border. By March 1945, they were again reassigned, this time to the 5th Army and the Po Valley campaign, where they were attached to the 92nd Infantry Division, an all African American unit. Together, they helped drive the Germans out of northern Italy.

Individual soldiers were awarded 18,000 decorations, including:

Success on Many Fronts

Because of the 442nd RCT’s success, the draft was reinstated in the internment camps back home, and several other battalions and companies were incorporated into it.

The 442nd RCT was demobilized and inactivated about a year after World War II ended. Many of the men who served in the 442nd went on to have distinguished careers in science, higher education and government.

For their heroic actions in combat and steadfast loyalty in the face of ethnic discrimination, more than 450 Japanese American soldiers of World War II were honored in December 2011 with the Congressional Gold Medal, the highest civilian award for service given out by the U.S.

It seems they certainly lived by their motto.

But why choose April 5 to become “Go For Broke” Day? It was on April 5, 1945, that the 442nd RCT’s first Medal of Honor recipient, Pfc. Sadao Munemori, was killed in action near Seravezza, Italy.