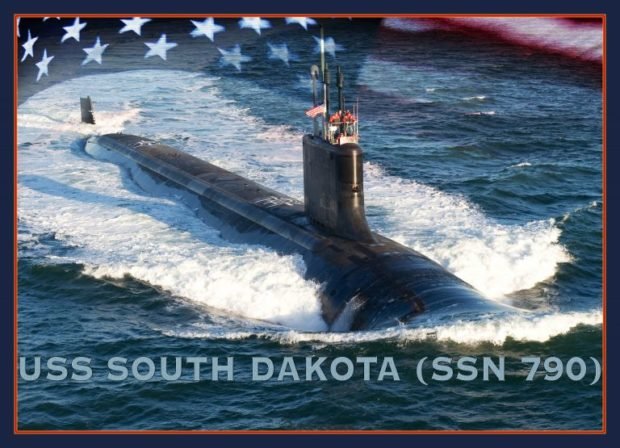 The principal speaker will be U.S. Senator Mike Rounds of South Dakota. The submarine’s sponsor is Mrs. Deanie Dempsey, wife of the 18th Chairman of the Joint Chiefs of Staff, Gen. Martin Dempsey. She will give the order to “man our ship and bring her to life!” in a time-honored Navy tradition.

“USS South Dakota enters service during a period of dynamic security challenges,” said Secretary of the Navy Richard V. Spencer. “I am confident USS South Dakota and its crew will ensure our Navy and nation remain safe and strong, and proudly serve our nation’s interest for decades to come.”

USS South Dakota, a Virginia-class submarine designated SSN 790, is the third ship to bear the state’s name. The first South Dakota was an armored cruiser commissioned Jan. 27, 1908. The ship served in a convoy escort role during World War I before being renamed Huron June 7, 1920.  She was decommissioned following seven years of service in the Pacific on June 17, 1927. The second ship was a battleship commissioned March 20, 1942. She saw service in a number of important World War II battles including Santa Cruz, Guadalcanal, Philippine Sea, and Okinawa, earning thirteen battle stars over the course of the war. South Dakota was present at Tokyo Bay when the Japanese surrendered and was later placed out of commission on Jan. 31, 1947.

Support Conservative Daily News with a small donation via Paypal or credit card that will go towards supporting the news and commentary you've come to appreciate.
Tags
the Department of Defense The US Navy USS South Dakota