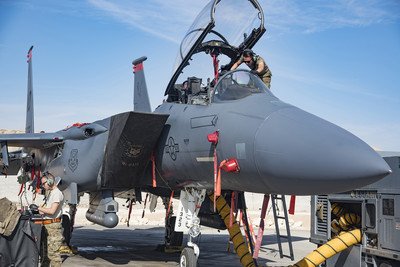 A lot of people think that if you’re in the Air Force, you’re flying a plane. But in reality, less than 4 percent of airmen are pilots. The majority of airmen serve in supporting roles, one of the largest of which is that of the aircraft maintainer.

“[Maintainers] have more responsibility than the majority of airmen in the Air Force,” said Air Force 1st Lt. Tate Ashton, 391st Fighter Squadron Sortie Generation Flight commander. “Nobody else is held to a higher level of accountability than they are.”

“There are so many moving parts, and if you don’t take your time it’s easy to miss something. We have to be 100 percent positive the plane is mission capable,” maintenance crew chief Senior Airman Griffin Langiano said.

They also work in specialized maintenance shops known as “back shops,” which focus on certain aspects of the aircraft’s function, such as weapons, guidance or propulsion systems.

After an aircraft has surpassed a certain amount of time in the sky, the maintenance crew takes it apart for an in-depth physical inspection of all its systems and components. The whole enterprise requires around-the-clock services that can take more than 1,500 man-hours to complete.

“It can get very taxing,” said aerospace propulsion craftsman Air Force Tech. Sgt. Terrance Reese. “It’s physical work, and you have to battle the elements, … but it’s worth it. When I see the plane take off I think, ‘I made that possible.’”

Support Conservative Daily News with a small donation via Paypal or credit card that will go towards supporting the news and commentary you've come to appreciate.
Press OperationsJanuary 11, 2019
Facebook Twitter Reddit Telegram Share via Email Print