A federal judge in Florida on Wednesday ordered the public release of dozens of documents kept under seal during BuzzFeed’s lawsuit over the Steele dossier.

District Court Judge Ursula Ungaro ordered that the documents be made public by Feb. 8. More than 40 records used in the case are listed in the order.

Ungaro’s decision will shed light into the discovery process during the defamation case, which included depositions with dossier author Christopher Steele and the founders of Fusion GPS, the opposition research firm that hired Steele.

Ungaro ruled in BuzzFeed’s favor on Dec. 19. The website was sued in February 2017 by Aleksej Gubarev, a Russian tech executive accused in the dossier of using his web hosting companies to hack into the DNC’s computer systems.

Gubarev vehemently denied the allegation, which Steele made in a memo dated Dec. 13, 2016. The memo was the last of 17 memos that compile what is now known as the dossier. BuzzFeed published the dossier on Jan. 10, 2017.

BuzzFeed apologized to Gubarev after the lawsuit was filed and redacted his name from the copy of the dossier posted to its website. But the website hired a private investigator — a former FBI and National Security Council official named Anthony Ferrante — to uncover evidence to support its legal defense.

BuzzFeed was also sued last year by former Trump attorney Michael Cohen. The dossier accuses Cohen of visiting Prague during the 2016 campaign to meet with Kremlin officials and to pay off Russian hackers. Cohen has vehemently denied the allegations, but dropped the lawsuit amid other legal problems.

He was sentenced to three years in prison on Dec. 13 on a variety of charges.

In her final order in the case, Ungaro revealed that BuzzFeed obtained the dossier through David Kramer, a former State Department official and close associate of Arizona Sen. John McCain. Kramer gave BuzzFeed’s Ken Bensinger a copy of the dossier on Dec. 28, 2016.

The discovery process of the case revealed Steele and opposition research firm Fusion GPS’s efforts to provide the dossier to journalists. Steele and Fusion founder Glenn Simpson met with reporters from The New York Times, The Washington Post, The New Yorker, CNN and Yahoo! News in September and October 2016.

Steele and Fusion GPS executives were deposed during the discovery process in the case.

The FBI relied heavily on some of Steele’s unverified memos to obtain surveillance warrants against former Trump campaign adviser Carter Page. Steele, a former MI6 officer, alleged in his report that Page met secretly with Kremlin insiders during a visit to Moscow in July 2016.

The FBI cited Steele’s unverified claims as part of a probable cause affidavit to obtain spy warrants against Page. Republicans have accused the FBI of misleading the surveillance court by relying on Steele’s unverified dossier and for failing to disclose that it was ultimately funded by the Clinton campaign and DNC. 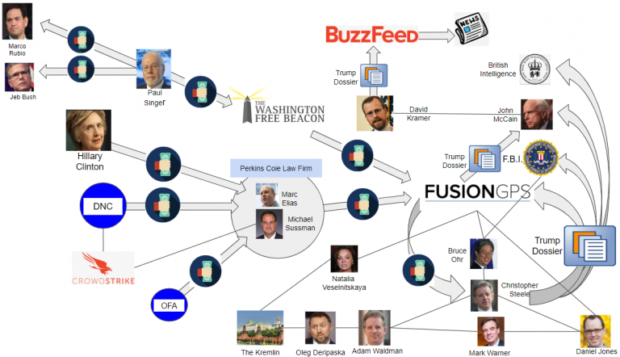 Support Conservative Daily News with a small donation via Paypal or credit card that will go towards supporting the news and commentary you've come to appreciate.
Tags
Buzzfeed David Kramer the Steele dossier