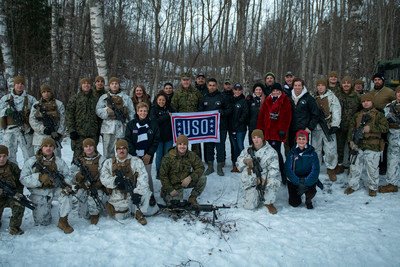 The Chairman’s 2018 USO Holiday Tour is bringing live acts ranging from athletes and actors to musicians and comedians to troops deployed overseas for the holidays.

Marine Corps Gen. Joe Dunford, chairman of the Joint Chiefs of Staff, is on his fifth USO holiday tour since becoming chairman. The tour’s first stop: Norway, where performers will bring a little bit of home to the airmen, soldiers, Marines and sailors deployed there in support of NATO and U.S. European Command.

“While we can’t bring our troops home for the holidays, we can bring a bit of home to them – that’s what the USO holiday tour is all about,” Dunford said.

The USO holiday tour was started in 2003 by then-chairman Air Force Gen. Richard B. Myers to express appreciation to deployed service members during the holidays.

About 190,000 service members will be away from home this holiday season, ashore in places such as South Korea, Iraq, Germany and Japan, and aboard ships in the Pacific and Atlantic Oceans, the Mediterranean Sea and the Persian Gulf. Overseas troops have been provided with traditional American Christmas dinners since World War II, no matter where they are stationed or deployed.

In addition to the USO tour visiting select worldwide locations, the troops will be well-fed:

This year, agency officials said they plan to send even more food.

During the 2018 holidays, the U.S. Postal Service said it expects to ship about 16 million pounds of mail to deployed service members and other Defense Department employees.