President Donald Trump will spend the day in North Carolina just days after the state suffered a direct hit by Hurricane Florence then torrential rains from the storm in the days that followed. Some areas of the state expect to remain flooded through early next week.

The president began his North Carolina visit at Marine Corps Air Station Cherry Point in Havelock, North Carolina where he received an update on the storm-ravaged areas of the Tarheel State.

The president visited Temple Baptist Church in Newbern, NC just after noon and talked with volunteers who were handing out food to survivors of Florence and its aftermath. 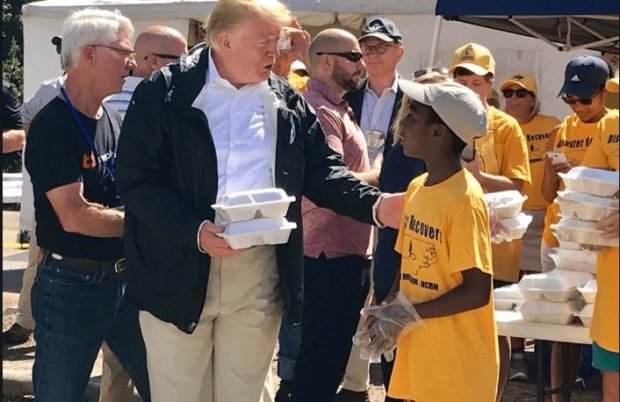 After visiting with volunteers and survivors in Newbern, the president returned the MCAS Cherry Point where he flew by helicopter to South Carolina. While visiting the town of Conway, SC, the president visited with groups of residents then visited the Horry County Emergency Operations Center.

Support Conservative Daily News with a small donation via Paypal or credit card that will go towards supporting the news and commentary you've come to appreciate.
Tags
Hurricane Florence North Carolina The President's Schedule Trump Administration