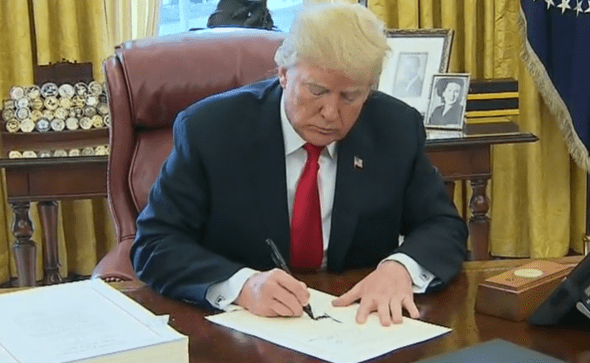 President Donald Trump signed a new budget bill, H.R. 1892, into law on Friday that pushes most of the difficult budget debate issues into March while funding defense, opioid addiction, infrastructure and more for two years.

H.R. 1892 was originally titled “The Hometown Heroes Act” and was intended to allow the flying of the U.S. Flag at half-staff in the event of the death of a first responder in the line of duty. That provision remained in the bill, but the short title was changed to the “Bipartisan Budget Act of 2018.”

The budget deal doesn’t deal with immigration and Democrats haven’t put forth any serious proposals. As the short-term funding measure is set to end on March 23rd and DACA is set to expire on March 5th, Dems will have to get serious about compromise or risk taking the blame for another government shutdown and the deportation of DACA recipients in the same month.

Nondefense discretionary funding was raised by $63 billion in 2018 and $68 billion in 2019. The end of sequestration and the increased funding raise nondefense spending by $131 billion.

Support Conservative Daily News with a small donation via Paypal or credit card that will go towards supporting the news and commentary you've come to appreciate.
Tags
2018 Budget defense spending federal spending Politics the Department of Defense