“Congressman Nunes’ deliberately dishonest actions make him unfit to serve as Chairman,” Pelosi said in a letter to Ryan on Thursday. “He must be removed immediately from this position.”

Pelosi condemns Nunes’ release of what she calls a “bogus memo” that takes the “GOP cover-up campaign to a new, completely unacceptable extreme.”

Pelosi refers to the Congressional investigation led by Nunes as “highly unethical” and “dangerous” upping the rhetoric just as it’s being reported that President Donald Trump will declassify the FISA memo and set it for release Friday morning.

The letter is little more than pandering to her far-left base as Republicans have control of the House so Nunes’ removal is highly unlikely. 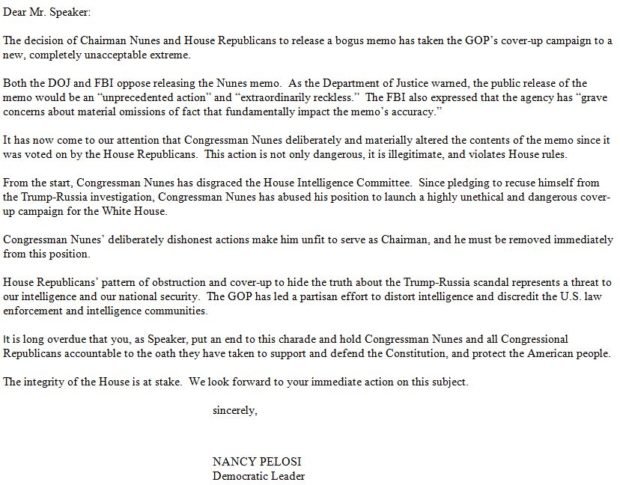 Support Conservative Daily News with a small donation via Paypal or credit card that will go towards supporting the news and commentary you've come to appreciate.
Tags
Devin Nunes Nancy Pelosi Politics The FISA Memo

A Red Tsunami Is Barreling Towards Democrats