Two Amtrak employees were killed and at least 100 other people were injured when an Amtrak passenger train collided with a CSX freight train early Sunday morning in Cayce, South Carolina near Columbia.

Amtrak train #91 was traveling from New York to Miami when it collided head-on with the CSX train derailing several cars on the passenger train. Of the eight crew and 139 passengers, two crewmembers are confirmed dead and at least 100 others have been injured. 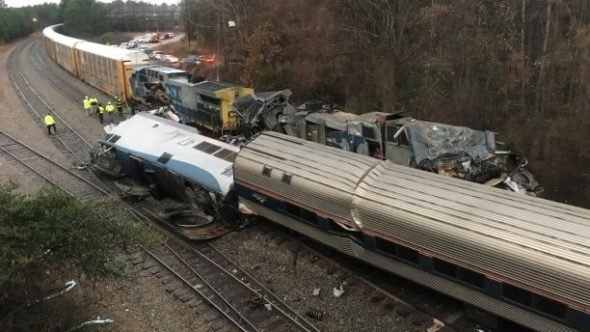 The crash happened in a stretch of tracks by a rail yard about 10 miles south of Columbia, where several track spurs split off for freight cars to be unloaded. Officials have not determined if both trains were moving or if the passenger train was diverted on to a side track.

This marks the third deadly Amtrak train crash in the last four weeks. Amtrak officials told those with questions to call 1-800-523-9101.

Support Conservative Daily News with a small donation via Paypal or credit card that will go towards supporting the news and commentary you've come to appreciate.
Tags
Amtrak South Carolina train wreck

Wut? 26-Year-Old Biological Male Sentenced To Girls’ Juvie For Molesting A Child After Coming Out As Trans