The U.S. House of Representatives on Wednesday passed, by a 224 to 201 vote, tax reform a second time after the Senate made small changes to the measure align with parliamentary rules. 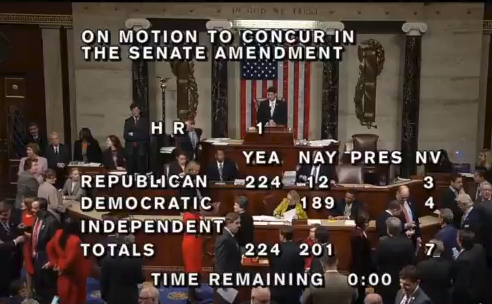 Without a single Democrat voting yes, Republicans pushed through the historic modification of the tax code widely expected to put more money in middle-income earner’s pockets and boost the economy.

The bill still has some administrative steps to clear before it reaches President Donald Trump‘s desk and Republicans are considering whether to wait until the new year to have it signed into law. Waiting until 2018 may allow them to avoid cuts to certain entitlement spending.

Mainstream media and members of the Democratic party have spent months talking down the Republican plan in hopes of preventing its passage. Once the legislation becomes law and the new tax tables are calculated, voters will begin to see their paychecks reflect the lower tax rates and higher standard deduction which will equate to a higher paycheck for most middle-income earners. Once those very real positive results come to light, Democrats will be unable to berate trickle-down, supply-side economics and admit that, once again – they work.

Support Conservative Daily News with a small donation via Paypal or credit card that will go towards supporting the news and commentary you've come to appreciate.
Tags
Politics tax reform the U.S. House of Representatives