Updated, 4:59 p.m.: Provisions in the tax bill violate the Senate’s procedural rules and will need to be removed, according to Senate aides.

The House is expected to re-vote on the legislation Wednesday, after the Senate votes Tuesday night.

The U.S. House of Representatives on Tuesday passed the Republican tax reform measure in a vote that went along party lines. 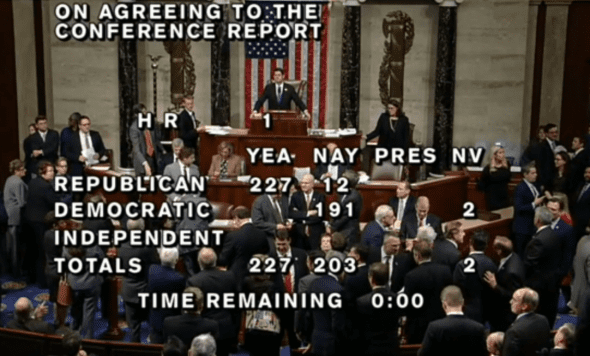 The vote sends the economy-boosting measure to the Senate for a vote that is also expected to pass along party lines as Democrats have vowed to oppose any measure favored by President Donald Trump regardless of its benefits for the American people.

Should the measure pass the Senate, President Trump is expected to sign it into law in coming days.

Support Conservative Daily News with a small donation via Paypal or credit card that will go towards supporting the news and commentary you've come to appreciate.
Tags
Politics tax reform the U.S. House of Representatives