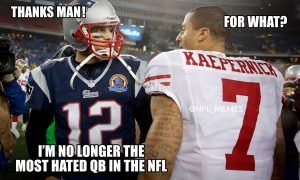 Just think — if Tim Tebow had taken a knee for Antifa instead of God he might still be in the NFL. Or at least he could be a topic of conversation for people wondering why Tebow wasn’t playing. I find it ironic a league that is now encouraging “celebrations” after a touchdown, frowned on Tebow offering a quick word of thanks after a score.

Offering a word of thanks certainly isn’t a problem with Colin Kaepernick.

Kaepernick loses his starting QB job and decides to make himself a spectacle by kneeling during the National Anthem to protest racism in a league that’s 70 percent black.

Tebow loses his starting QB job and quietly accepts an insulting assignment as a blocker on the punting unit, where he suffers broken ribs as a reward for being a team player.

Kaepernick says he can’t “stand up to show pride in a flag for a country that oppresses black people and people of color” and “there are bodies in the street and [cops] getting away with murder.” How this squares with the fact he was adopted by white parents and felt comfortable wearing socks that depicted police as pigs while cops were standing only a few feet away went unexplained.

Both players aren’t particularly good pocket passers and both frequently resort to running with the ball when pressured.

Tebow isn’t offered another chance in the NFL even after spending an entire off–season working with a QB–whisperer to improve his throwing mechanics. Kaepernick evidently spent his off–season growing an Afro that rivals that of Angela Davis in her heyday. Tebow’s football career is over and no reporters are asking if he was blackballed because of his Pro–life Super Bowl ad.

Kaepernick appears to be done, too and the Opposition Media, which invaded the sports page, is convinced he’s being blackballed.

Sally Jenkins in the Washington Post condemns NFL owners, “They care that he is a disrupter–dissenter who refuses to play the stock character role assigned to him and might threaten a bottom line. As a result, they have blacklisted him — there is no other term for it — and in doing so have unintentionally underscored his message about pervasive injustice for blacks.”

Then she can’t tell the difference between being fired for an internal memo meant to stay inside the company and a public workplace insult that offends a majority of the customer base. Jenkins sees equivalence between James Damore, Google engineer who authored the memo, and Kaepernick, “You don’t have to agree with Kaepernick taking a knee during the anthem last season — or Damore’s reasoning and language — to be offended by the fact that they are out of jobs for speaking their well–intentioned minds.”

Her colleague, Jerry Brewer, appears to think Kaepernick is a modern Paul Revere warning America of a resurgence of the Klan as “racists feel empowered again.”

Neither of these hyperventilators gives any credence to what Hall of Fame running back Jim Brown said of Kaepernick. Brown knows something about racism. He played in the Jim Crow NFL before the passage of the Voting Rights Act. Brown knows about personally suffering systemic, government–imposed racism and he thinks Kaepernick is a poseur.

Brown told The Post Game, “I’m going to give you the real deal: I’m an American. I don’t desecrate my flag and my national anthem. I’m not gonna do anything against the flag and national anthem… this is my country, and I’ll work out the problems, but I’ll do it in an intelligent manner.”

That’s not a observation that’s going to generate coverage for Brown in the OpMedia, just as Green Bay Packers Safety Ha Ha Clinton–Dix wearing socks with the names of four Dallas police officers murdered by a Black Lives Matter assassin fell into the media’s memory hole.

I’ve never heard a reporter ask Kaepernick what country he prefers to the US? I doubt it’s China, even though white people have no privilege there. The People’s Republic just passed a law making it illegal to mock the Chinese national anthem and the offense is punishable by up to 15 days in jail.

Reporters also never ask Kaepernick how he will know he’s achieved success. Will it be when blacks are allowed the vote? When a black woman has a top–rated national talk show? When the US elects a black president?

The fact is Kaepernick is a marginal QB with a bad attitude who missed the limelight. He’s also a guy whose commitment to “racial justice” was so immutable he backed off the protests when he was trying to land another team.

It’s time for Kaepernick to find another line of work where insulting Americans is part of the company culture. I hear ESPN is hiring.

MLB Post Season Monday: Who’s Playing and Where to Watch

The Fracture of American Culture