As Georgian’s in the suburban Atlanta U.S. House sixth district go to vote, the most recent poll trends towards Handel despite a strong showing by her opponent in early voting.

A Trafalgar Group poll released Monday night shows Karen Handel (R) ahead of Democrat Jon Ossoff by almost 2 points among 1,100 likely voters. While that lead is still within the poll’s 2.9% margin of error, it is an improvement over Friday polls that had shown Ossoff in the lead by around one point. Voters who had already voted said they chose Ossoff by a 51% to 49% margin.

Those who have not yet voted and are likely to vote favor Handel by 55% to only 42% for Ossoff which, if GOP voters turn out should mean a confident win for them. 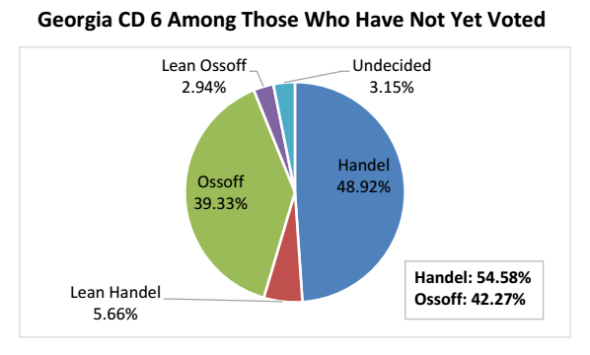 The Trafalgar group has an amazing track record in battleground polling.

The Trafalgar Group is widely recognized as the best polling firm of the 2016 election cycle, correctly forecasting the results in key battleground and other states (PA, FL, NC, MI, OH, CO, GA) and exactly predicting the Trump electoral college margin of victory (306-232)

Real Clear Politics poll average shows the remarkable job Handel has done to beat back the astounding amount of outside money and influence being poured into the Georgia special election. 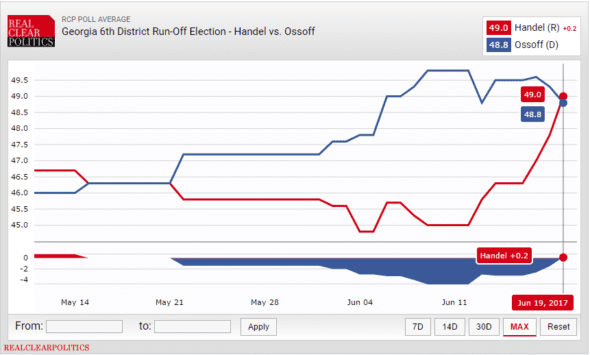 “The shift we see toward Handel in the closing days of this race is a bit of GOP homecoming,” said Robert Cahaly of the Trafalgar Group. “These disenchanted Republicans are beginning to put their concerns aside and see this election as a choice–a choice between the Party and leaders they’re disappointed in and a Democrat Party and leaders that trouble them even more.”

Democrats have failed in three other special elections to make them a referendum on Trump. Today, the last two such races in South Carolina and Georgia represent the left’s last chances to create momentum going into 2018.