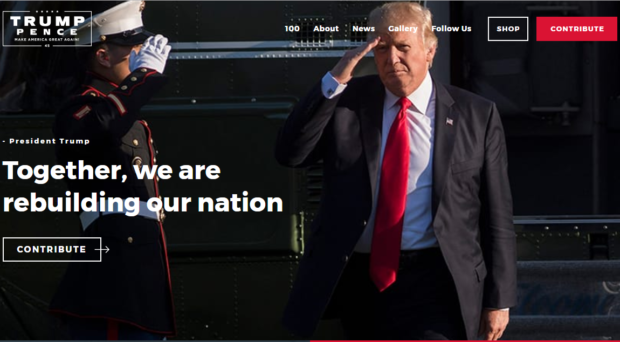 The new website is at the same address of his 2016 election site but has been completely reworked to reflect President Trump’s accomplishments.

The home page features all the usual links. Visitors can contribute to the president’s re-election fund, shop for Trump merchandise, see pictures and read the latest news from the campaign’s perspective.

A video telling the story of Cali-Fame, the company that makes the famous MAGA hat, is prominently featured next to a box telling visitors to “join our movement!”

An entire page, “First 100 Days: The Truth Mainstream Media Refuses To Tell”, is dedicated to promoting the president’s accomplishments and features the “First 100 Days” video ad that the major networks refused to run.

The about section of the site describes Trump as “the very definition of the American success story, setting the standards of excellence in his business endeavors, and now, for the United States of America.”

Starting a re-election campaign almost four years before the election is a big change in presidential races. But, this is the same president that may have just changed Twitter.

Support Conservative Daily News with a small donation via Paypal or credit card that will go towards supporting the news and commentary you've come to appreciate.
Tags
2020 Election News Politics