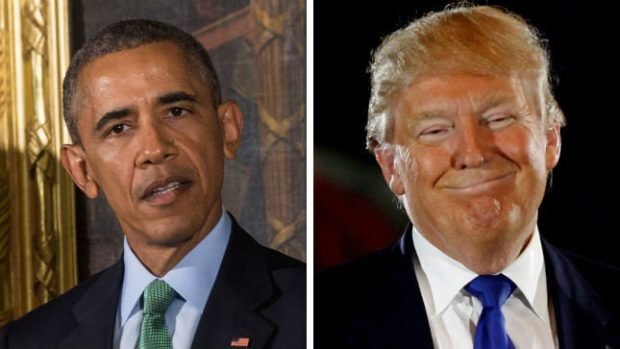 This is a tale of two presidents. Barck Obama, who was timid, weak, apologetic and appeasing and the Donald Trump, who is strong and understands the threat of evil that exists in our time.

When Obama left the presidency he left the country in a total mess and worse off than when he entered.  We are now 20 trillion in debt and it was nine trillion when he entered. He criticized Bush for increasing it from 5 trillion to nine trillion and called him unpatriotic then added 10 trillion himself.  We have 95 million out of the workforce,50 million on welfare, 45 million on food stamps, racial unrest, housing starts at a 50 year low and all these individual groups demanding special rights.

On an international level, Obama displayed weakness for eight years. He rolled over and appeased terrorists every time calling acts like Fort Hood and San Bernadino “workplace violence” and the Boston bombers and Orlando nightclub shooter “isolated incidents.” He appeased terroristic countries every time and drew lines in the sand. Every time they crossed that line he drew another one. He went on an Apology tour apologizing or America all over the world, had the Muslim Brotherhood in the white house and gave Iran, businessmen the No.1 state sponsor of terrorism 150 billion dollars in the hopes they would modernize and gave them an additional 1.7 million for the release of the hostages. Iran is now making nukes that can destroy us and Isreal with that money. I secretly think he was siding with and sympathizing with them and was their man for over here incognito.

Enter Donald trump. A man hated by the liberal media and all libs in general who are making up all kinds of tin foil hat fake news stories about him. He is one of the most businessmen in the world today and for decades now people have been clamoring for a businessman to run the country. Sure he is new at being president and ha s a lot to learn, but he has displayed a bravado and toughness that is setting everyone and the world on notice that there is a new sheriff in town.  Obama was just a community organizer who was a senator for a year who just voted “present” before he became president.

He called terrorists “evil losers” and said he didn’t call them monsters because they would like that name.

In a pointed departure from his predecessor, Trump all but promised he would not meddle in the affairs of Mideast rulers — and asked instead that they focus their effort on extinguishing Islamic terror from the world.

“We are not here to lecture — we are not here to tell other people how to live, what to do, who to be, or how to worship,” Trump said, speaking in an ornate room in the Saudi capital. “Instead, we are here to offer partnership — based on shared interests and values — to pursue a better future for us all.”

In his Saudi speech, Trump showed the world what a real leader is, and openly condemned “Islamic extremism,” ″Islamists,” and “Islamic terror” while speaking directly to Islamic leaders from around the world. The king has lavished praise and all the trappings of a royal welcome on the new American president, welcoming in particular Trump’s pledge to be tougher on Iran than Obama was. : Trump accused Iran of “destruction and chaos” and the king said its rival “has been the spearhead of global terrorism. [Must see] The internet BLEW UP over Trump’s speech Sunday – The Horn News

This is a man who gets it. He understands evil exists in our time (the recent bombing in Manchester is a perfect example of that) and must be defeated. Leadership is back!!!