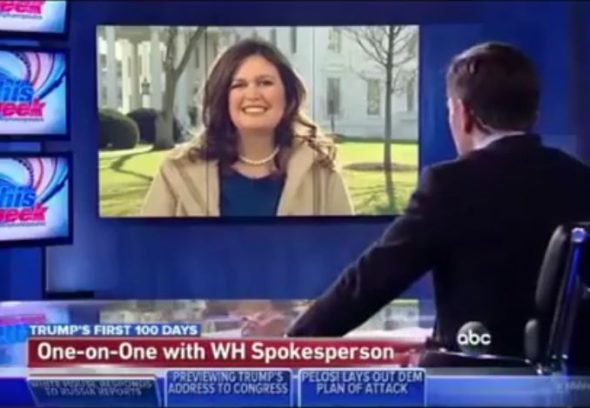 The host of ABC’s “This Week” George Stephanopoulos asked Sanders for her response after he played a video of Rep. Darrell Issa (R-CA) calling for Attorney General Jeff Sessions to recuse himself from the investigation into President Trump’s staff and their alleged contacts with Russian officials during the campaign.

“I think the real easy answer here is that the FBI has already said this story is B.S. Those are their words, so I apologize to my mom,” Sanders answered. “But literally those are the words of the FBI, that the story is B.S. They came to us, they approached us. We’re putting that story out there.”

Reinforcing the narrative that the Russia story is just a media-created tempest in a teapot, Sarah said: “Just because reporters say something over and over and over again doesn’t start to make it true. At some point, we get to a place where we have got to move on and start focusing on the things that the American people care about and I don’t think this is it.”

Stephanopoulos then asked Sanders if the president “could promise that no one would lose their healthcare” under the repeal and replace strategy shared with Governors last week.

“What I know that the President can promise is exactly what he’s been saying. . . . This is not just a repeal program, [and] we absolutely have to repeal it but replace it with something that’s better,” the deputy press secretary replied.

When asked about the President deciding not to attend the White House Correspondents Dinner, Sarah said: “I think it’s pretty safe to say, I think we all spend enough time around each other as it is. But look, this wasn’t a President who was elected to spend his time with reporters and celebrities. This was a President who campaigned on speaking directly to Americans and that’s exactly what he’s going to spend his time doing.”

“There’s no reason for him to go in and sit and pretend like this is going to be just another Saturday night,” Sanders answered. “I think he’s very focused on protecting our borders, national security, growing our economy, and instead of going and spending a night doing that, I think he’ll spend the night focused on what he can do to better America.

Sanders threw out a down-home expression to demonstrate just why the President wouldn’t be attending the dinner.

“You know, one of the things we say in the south: if a girl scout egged your house, would you buy cookies from her? I think this is a pretty similar scenario.”