This season a remarkable decision took place on the next–to–last play of the Oklahoma vs. Oklahoma State football game. This intra–state championship matchup dates back to 1904, but this matchup was particularly important. Oklahoma was ranked #9 and OSU just behind at #10. The game winner would not only have bragging rights, the victor would also be the Big 12 champion.

My alma mater OU got off to a ragged start. The defense was exceptionally porous and the usually reliable running game stalled. Then in the second quarter Heisman Trophy candidate receiver Dede Westrook was knocked unconscious after being hit while making a catch. 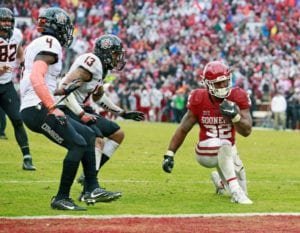 OU dropped seven points behind, but managed to tie 17 – 17 to end the half. In the third quarter, just as prospects were looking up for the Sooners, RB Samaje Perine limped off the field and into the locker room.

Perine is the Sooners’ hammer. He’s a punishing straight–ahead runner who brings back memories of Steve Owens. Without him the load would go to Joe Mixon, who so far was having an off day. It looked like a long afternoon ahead.

Then without ceremony Perine quietly returns. Viewers, like the OSU defense, learned he was back when he got the ball. On a rainy, slick day OU wanted to keep the ball on the ground and use up the clock. Perine got the ball play after play after play. OSU had eight players stacked on the line and they knew who was going to get the ball, yet he kept going.

On the last drive of the game he carried the ball 11 times and it looked toward the end like some OSU players had their fill of tackling Perine. They began making what Deon Saunders called “business decisions.”

Then it happened. On what became the last time he would touch the ball, Perine broke through line and had a clear path to the goal line. Nothing short of Divine Intervention could have prevented a touchdown, yet just before he crossed the goal line, Perine stopped, took a knee and ended the play.

The announcers didn’t make much of it at the time, as OU ran out the clock, but the significance struck me immediately.

It was an extraordinary act of sportsmanship. Maybe viewers who have never played a contact sport miss these nuances, but those of us who have appreciate a player who has some reverence for the way a game should be played.

In rivalry grudge matches, particularly when one of your star players has been knocked out of the game, it’s natural for teams to want to punish their opponent and the scoreboard is the natural place to do it.

Perine didn’t. When asked about the play after the game he explained, “I mean, what’s the point of scoring? We’re already up by two touchdowns. There’s only a few seconds left, so there’s no need to run up the score. I just did what I thought was the right thing to do.”

Coach Bob Stoops explained that taking a knee was all Perine’s idea, “God bless him. “What a class, character guy. It’s character. That’s him. Rather than padding his stats, just take a knee. No sense in running it up on somebody.”

This is typical of Perine. He plays like the coach is Vince Lombardi. Earlier in the game Perine crashed head–on into an OSU defender on the goal line and swept by him for the score. Instead of treating teammates, TV cameras and opposing players to 20 seconds of interpretive dance, Perine handed the ball to the nearest official and walked back to the huddle.

While he’s got the ball Perine is all business and all contact, but even in this heated rivalry game he helped OSU players to their feet more than once. After the game he sits in the back of the interview room and lets other teammates bask in the spotlight.

The knee and what it signified might be Perine’s last regular season carry for Oklahoma. Perine is a junior. An average performance in the Sugar Bowl will put him ahead of Owens and probably ahead of Billy Sims, giving him the all–time Sooner rushing record. He’s eligible for the NFL draft and as my son says a running back’s body can only take so many hits, to Perine may as well be rich when he’s bruised.

If he leaves, I’ll miss watching him, but what a way to finish.

Thirty–seven carries, the most by one running back in the last 27 years, 239 yards, one touchdown for the record books and one he decided to donate to sportsmanship.

Support Conservative Daily News with a small donation via Paypal or credit card that will go towards supporting the news and commentary you've come to appreciate.
Tags
Big 12 Championship college football OSU Samaje Perine The Bedlam Series University of Oklahoma