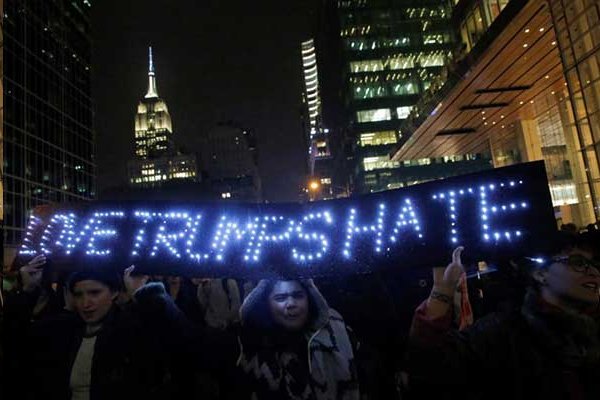 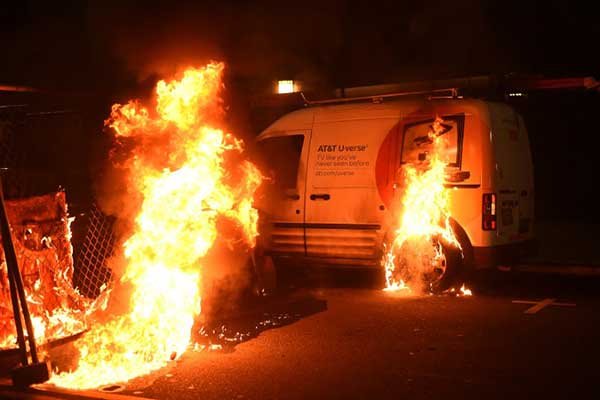 Shouting  “Love Trumps Hate” riots have broken out across the country as people are protesting Donald Trump winning the presidential election fair and square. Since his victory, hate has been spread all over the country by the so called “love spreading” liberals  who say they are against hate.

Liberals are a bunch of hypocrites. They protest they don’t want a “violent” president, and they then go out and attack people, destroy property, burn flags, break store windows and riot in the streets! In what way is that peaceful? Ahh yes Love Trumps Hate alright.

On Universities in San Francisco teachers have cancelled exams so students can have time to mourn. Students have formed “cry-ins” as they sit around and cry their eyes out in their safe spaces. In Boston University they have grief counselors and even therapy dogs for these wimpy, mourning students.

What kind of upbringing did these kids have? Have they never had a break-up? Have they never had a tragedy in their family? Have they never had a challenge to overcome? Has their life been so wonderful that they don’t know what sadness or difficulty or tragedy is and have to get over it and move on? I guess not judging by these reactions. I bet Russia and ISIS are looking at us and saying “Ah these Americans will be a push over to conquer.” As I mentioned in my previous blog  political correctness s the virus leading to the tyranny of hypersensitivity.

Shocking footage out of California shows a high school girl being viciously beaten by another student for saying she supported Donald Trump on Instagram, the latest example of an anti-Trump hate crime wave sweeping the country. Meanwhile, at a school in Stafford, Texas, an 11-year-old boy was violently attacked after telling classmates he voted for Donald Trump in the school’s mock election, leaving him having to use crutches. In another incident, a 17-year-old student in Florida punched a classmate in the face because he was holding a Donald Trump sign during gym class. Video: High School Girl Viciously Attacked For Supporting Donald Trump » Alex

The main sponsor of these riots is the multi billionaire  George Soros in his desire for a one world government. He gave Hilary two million dollars for her campaign as he wished for a hemispheric government just as he wanted. Soros doesn’t have long to live being 86 years old and wants to see his wish before he dies. He goes around to different countries manipulating their governments in his bid for his one world government dream. Putin wants him dead or alive for tampering with his government. With Hillary losing that throws a huge wrench in his plans. Now, on Craigslist, they are trying to rent people to show up and protest Donald Trump. And guess who is organizing it? George Soros, Hillary Clinton’s major donor and supporter, as per Breitbart.com. BREAKING – Guess Who Paid For the Anti-Trump Riots In New York?

Meanwhile TV pundits are still wondering how the polls could be so wrong?  I was hoping they would react that way right after election night. Before the election all we saw was polls, polls, polls. Don’t they realize that people lie in polls just to throw them off? A person supporting Trump will say they are supporting Hilary just to throw them off so these people will have egg on their faces afterwards. These news outlets have asset number of people they ask all the time and are usually twice as many democrats than republicans. As Eric Boling said recently on FOX News “You should stop watching polls and start watching people.”