Whether it was YouTube’s doing or that of the Team Trump account owners, a new video ad paid for by the Donald Trump campaign was moved to an unlisted status and labelled with a warning cautioning users about sharing the video. 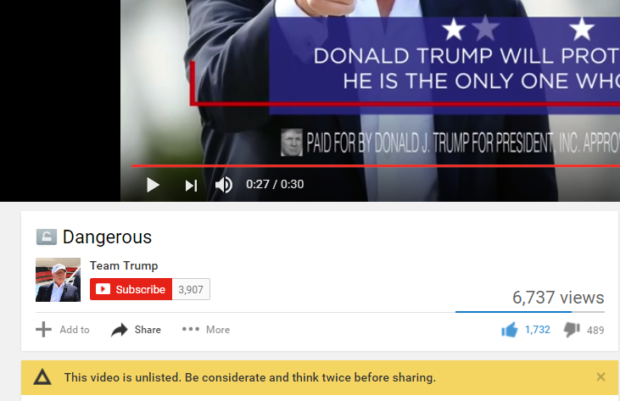 The video “Dangerous” begins by outlining the dangerous world the next President will face while mentioning Hillary’s failure to handle those situations.

The video then shows clips of Clinton coughing, struggling to climb stairs and collapsing just before being tossed into her transport van while the voice-over says “Hillary Clinton doesn’t have the fortitude, strength or stamina to the President.”

An unlisted video will not show up in YouTube searches, google searches, the channel page or the most-watched video listing making it much harder to be discovered.

Some are blaming YouTube for having delisted the video, but CDN has been unable to confirm that at this time.

Team Trump may have chosen to set the privacy option of this video to “unlisted” voluntarily as it allows people who do not have YouTube accounts to view the video without creating one. They only need to the link to the video to see it. We’ll just put it right here for you.

Support Conservative Daily News with a small donation via Paypal or credit card that will go towards supporting the news and commentary you've come to appreciate.
Tags
2016 Election News 2016 Presidential Election YouTube