Today we have two widely separated instances of voters unable to grasp the connection between the people they elect to office and the policies and taxes that make them angry. 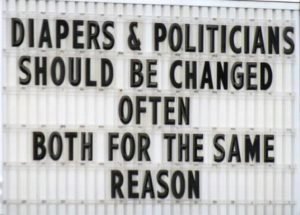 In Montgomery County, MD — a bastion of Democrat Leftist compassion and social justice — incumbent members of the county council are contributing funds from their campaign accounts to defeat a referendum designed to impose term limits.

What, you thought they’d use their own money? These are incumbent politicians, they use other people’s money to affect social change.

Just like vampires use other people’s blood for sustenance.

The term limit referendum is a voter–led response to a council that boosted it’s salary to $135,000 a year, for a job that’s supposed to be part–time, and increased property taxes 9 percent. The prime mover behind the referendum is a local activist, Republican and, if truth be told, jerk named Robin Ficker.

Ficker, on the side of the angels here, calls the incumbents “self–serving tax increase specialists” in coverage by the Washington Post. And he claims “44 percent of the signatures [on the referendum petitions] came from registered Democrats.

If passed, the referendum would limit council members to three consecutive terms for a total of 12 years in office. That might be long enough for the government to indoctrinate your child, but for a politician it’s barely enough time to settle in at the government trough.

That’s why the “No on B” campaign attracted the politician’s donations and support of the Montgomery Education Association (putting teachers first since its founding), Casa in Action (an illegal alien, sanctuary city support group), the African–American, Latino and Muslim Democrat clubs (racial bean counters) and the Democrat party as a whole.

Ficker is unimpressed, “Quite frankly, I hope they all put in a million dollars. I hope they spend all their money fighting this. We need change in Montgomery County.”

Strangely enough, the situation is somewhat similar in Gaza. There the incumbents are from Hamas and they never tire of talking about their compassion for the Arab people and corresponding hatred for Jews.

The difference is in Gaza term limits initiatives are of a more kinetic nature and typically originate in Israel. Since being voted into power in 2007, Hamas has been responsible for starting and losing three wars against the Little Satan.

Gaza was in the news when the Post covered an outing of senior citizens allowed to visit Jerusalem: “A few hundred older Palestinians may now exit the coastal strip on Fridays and take the 90-minute bus trip to Jerusalem to pray at al–Aqsa Mosque, the third-holiest site in Islam.”

Residents of Montgomery County who want to visit a free land have only to get in the car and drive a few miles to Virginia. In Gaza visitors must run a “security” gauntlet. The first stop is the Hamas checkpoint where green-uniformed thugs give travelers the stink eye. The next stop is the Palestinian Authority checkpoint where the thugs Hamas ousted do their own rousting. Here the seniors were arbitrarily told they could not bring food or water into Israel lest it fall into the hands of the Jews.

Final stop is the Israeli checkpoint where bags are x–rayed for bombs, — the PA takes food from travelers, but explosives are waived right through — passengers are scanned and papers examined.

Once In Israel the Arabs were amazed at how green the country is, how smooth the roads are and how the basic infrastructure functions. Back home they live in squalor because the damage from three wars is mostly unrepaired because Hamas steals construction material to build missile–firing bunkers and more tunnels to invade Israel.

Hamas has outsourced any government functions that don’t involve explosions to “humanitarian groups” and as a result 70 percent of the population lives on handouts.

In the end though, neither population is capable of understanding the type of government they support is responsible for their woes. There’s an excellent chance the term limits question will pass in Montgomery.

The old sullen Democrats will be forced out of office by an unrelenting calendar only to be replaced by newly elected Democrats that will continue the tax and spend policies that generated the initial outrage.

There won’t be another election in Gaza anytime soon, but residents will continue to blame the Jews and not Hamas for all their problems.

How long until either realizes its the ideology and not the implementors that must change.

Support Conservative Daily News with a small donation via Paypal or credit card that will go towards supporting the news and commentary you've come to appreciate.
Tags
Democrats Gaza Hamas Israel Montgomery County No on B Politics Term limits The Washington Post