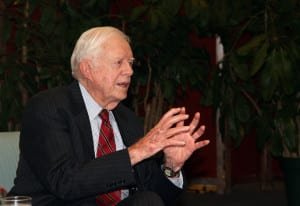 Former President Jimmy Carter told the United Kingdom parliament that he would rather see Trump than Cruz as the GOP nominee.

“The reason is, Trump has proven already that he is completely malleable. I don’t think he has any fixed opinion that he would fight for.”

“If I had a choice of Republican nominees, between Cruz and Trump, I think I would choose. Trump – which may surprise some of you,” Carter told a group assembled in the House of Lords.

The king of wishy-washy said he preferred Trump because Donald would be ..er … wishy-washy.

“The reason is, Trump has proven already that he is completely malleable,” Carter said. “I don’t think he has any fixed opinion that he would fight for.”

As Trump has changed his stance on just about every major issue over the last few years, it’s understandable that many see him as pliable.

Donald is a negotiator, which means he’s always willing to give something to get something as long as there is something in it for him.

Carter sees Ted Cruz as a problem for the progressive agenda.

“On the other hand Ted Cruz is not malleable,” Carter said. “He has far right-wing politics, in my opinion, that would be pursued aggressively if he wins.”

Carter then voiced that he sees Hillary as the eventual Democratic nominee, but that he’d back the nominee whomever it was.

Support Conservative Daily News with a small donation via Paypal or credit card that will go towards supporting the news and commentary you've come to appreciate.
Tags
2016 Election News Jimmy Carter Ted Cruz