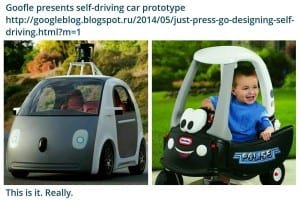 To give you an idea of how far the nation’s confidence has retreated from the exuberance of the 60’s — I promise this isn’t an endorsement of Donald Trump — just look at current automotive culture.

Government Motors designs flimsy boxes to conform to arbitrary fuel efficiency standards. Electric cars, which the government wants a select few to drive while the rest of us are on a bus, are so expensive the only way to persuade the average person to own one is to subsidize the purchase with thousands of tax dollars.

Naturally “activist” busybodies worry those geek hummers don’t make enough noise to warn headphone–wearing idiots of the auto’s approach. That certainly wasn’t a problem with the Shelby Mustang. The roar of the exhaust in even the stock model approached NASA decibel levels.

Muscle cars were the perfect compliment to a muscular country. “Big Daddy” Don Garlits was a household name, “Fun, Fun, Fun” dominated the radio and Ford won the 24 Hours of Le Mans.

The future according to Google features a self–driving car characterized an inability to relate to the moving culture around it. I call Google’s effort the Asperger Auto because of the effect the cars have when they leave the Google test track.

Individuals with Asperger Syndrome have trouble with social interaction and are often bound by limited or restricted patterns of behavior. Google’s car has all the classic symptoms: inward directed, reluctant to change behavior to fit surrounding social circumstances and a refusal to acknowledge social cues from other drivers.

Bloomberg Business reports a California motorcycle cop had experience first–hand when he observed traffic stacking up behind a suppository–shaped auto.

He entered the history books as the first motorman to initiate a traffic stop on a robot car. Equally unique, he resisted the temptation to inquire: “Do you know why I stopped you?” because there was no one to ask.

The self–involved vehicle was putt–putting along at 24 MPH in a 35 MPH zone, ignoring the jam it was creating as drivers with a rapidly deteriorating opinion of Google stacked up behind.

The quandary for the cop was to whom to give the ticket? The car couldn’t sign the summons and the two engineers aboard claimed to be just passengers. So the officer let the human cargo off with a warning and threatened to drop a magnet into the car’s CPU if it happened again.

Depending on whom you ask, auto–autos have between twice and five times the accident rate of human drivers. One similarity the cars share with humans is the accident is always the other guy’s fault, although in the car’s case it appears to be true.

A study from the University of Michigan found driverless vehicles, like your teenage daughter, have never been at fault in an accident. The auto–autos are “usually hit from behind in slow-speed crashes by inattentive or aggressive humans unaccustomed to machine motorists that always follow the rules.”

In essence, an auto strictly obeying the law is such a rare occurrence it may actually constitute a road hazard.

California is ready with a solution similar to the old law that required a horseless carriage to post a man with a lantern walking before it to warn unsuspecting horses. Regulators want a “backseat–driver–on–call” vehicle that “would require a human always to be ready to take the wheel.”

Naturally Google, the inventor of the “Cast Your Fate to the Wind” model that doesn’t have a steering wheel or a gas pedal, objects to the new rule.

Google has managed to automate the velocity vigilante who parks his sanctimonious speed limit observing vehicle in the fast lane and forces drivers with a greater sense of urgency to pass on the right.

The self–righteous, self–absorbed Asperger Auto coming to a highway near you.

Support Conservative Daily News with a small donation via Paypal or credit card that will go towards supporting the news and commentary you've come to appreciate.
Tags
Google self-driving cars transportation